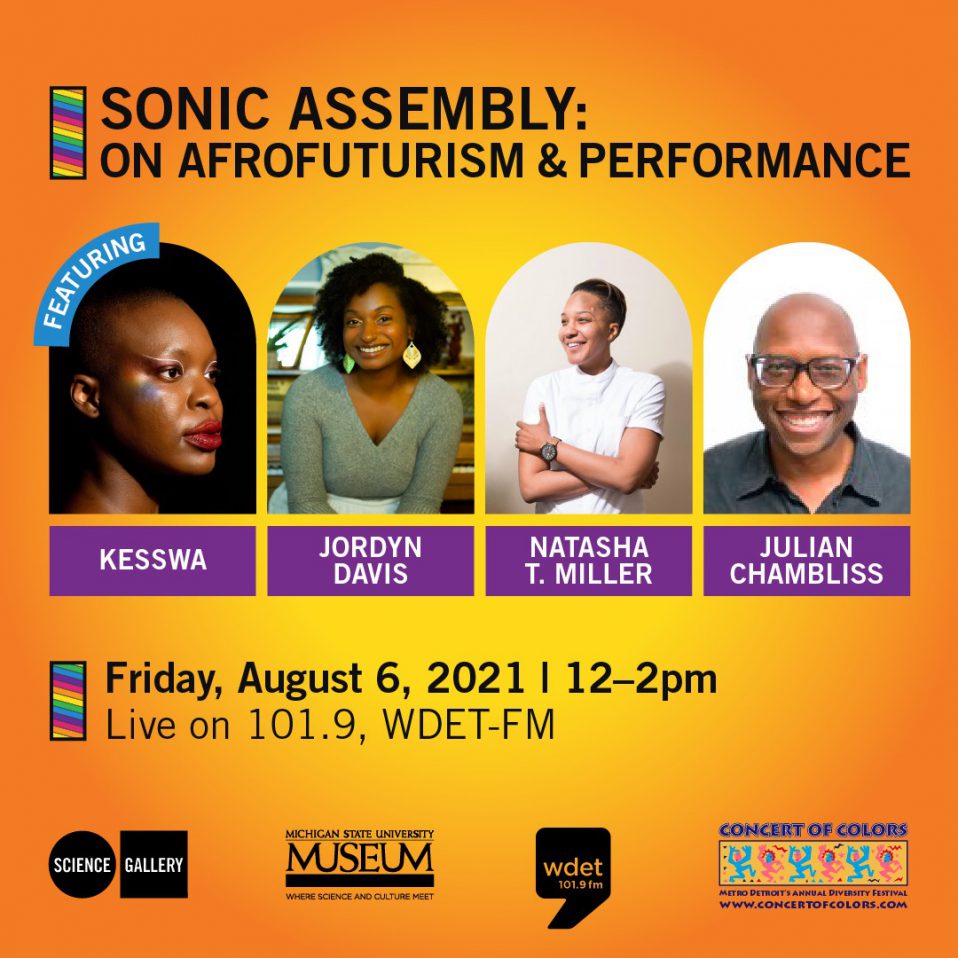 MSU Museum’s Science Gallery is pleased to present—in partnership with WDET-FM, Detroit’s NPR Station—a two-hour program exploring Afrofuturism in Detroit called Sonic Assembly: On Afrofuturism and Performance. Hosted by Amanda LeClaire of WDET’s CultureShift and Antajuan Scott, Science Gallery’s Head of Programming, this special broadcast will air on Friday, August 6, 2021 from noon to 2:00pm on WDET 101.9 FM as part of the 29th Annual Concert of Colors.

Afrofuturism is an ideology with strong roots in the city of Detroit. From musical acts like Parliament Funkadelic to the writings of author Clarence Young, the points of access span the creative sphere. For this special event, acclaimed Michigan State University scholar Julian Chambliss, the Val Berryman Curator of History at the MSU Museum, will provide an introductory overview on Afrofuturism for the show’s audience. Afterwards, the program will continue with interviews and performances by three acclaimed, Detroit-based, performers. This includes Kesiena Wanogho (aka Kesswa), Jordyn Davis, and Natasha T. Miller.

The 29th Annual Concert of Colors—Detroit’s most beloved free, global music festival—will be a blend of live, broadcast, and streamed events for eight exciting days Monday, August 2- 9. The list of greats from around the world include Roy Ayers, Melvin Davis, Souad Massi, Organic Orchestra & Brooklyn Raga Massive and acts from Haiti, Japan, Uganda and other countries. The Don Was All Star Detroit Revue returns for a spectacular tribute to George Clinton.

For the second consecutive year, Science Gallery will contribute programming to the Concert of Colors that explores the rich musical and cultural heritage of Detroit. Sonic Assembly: On Afrofuturism and Performance is made possible, in part, by the Michigan State University Federal Credit Union (MSUFCU).

Kesswa
Kesiena Wanogho, aka Kesswa, is an interdisciplinary artist from Detroit. As a vocalist, producer, and music curator, her work integrates performance, sound, light, music, and mantra. Her most recent work, KESSWA UNLIMITED, blends surrealist visuals and the sonic elements of her debut EP, Soften. She has performed in support of avant-garde black artists such as Sudan Archives, The Sun Ra Arkestra, River Spirit, Rashaad Newsome, and Sterling Toles at institutions such as The Cleveland Art Museum, The University of Michigan Museum of Art, and the Detroit Institute of Arts. Her musical work has scored films such as Ahya Simone’s Femme Queen Chronicles and Jamil McGinnis and Pat Heywood’s Gramercy. Her collaborations include: Allied Media Conference’s 2020 Opening Ceremony with featured artist Esperanza Spalding; Got Flicked (The Rebirth) from Boldy James; and Sterling Toles’ The Manger album; and an upcoming project with renowned music producer and percussionist, Shigeto.

Jordyn Davis
As a recent graduate of Michigan State University, Jordyn Davis is the first African-American woman to receive a Bachelor’s Degree in Music Composition from the university, as well as the first graduate to receive a Bachelor’s Degree in both Music Composition and Jazz Studies concurrently. Davis spends much of her time composing and arranging music for film, chamber ensembles, and symphony orchestra that have been performed at the Detroit Institute of Art, Peter D. & Julie F. Cummings Cube, Guarneri Hall – Chicago, the University of Michigan, Michigan State University, and more. As a bassist, she has traveled the world and performed at the Michigan Jazz Festival, with the Black Excellence Trombone Choir, Bruce Barth, and Michael Dease. Additionally, she is the founder of an indie rock/neo-soul project called “Composetheway,” which she founded in 2016 to express ideas about recognizing the importance of self-love and empowering others.

Natasha T. Miller
Detroiter Natasha T. Miller is performance poet, LGBTQ activist, film producer, and founder of the “Artists Inn Detroit.” Natasha has been a member of four national slam teams, starred in a national Sprite commercial, a Shinola CNN ad, and she is a Women of the World Poetry Slam 3-time top five finalist. She has awed audiences across the world at more than 100 universities and venues, and has performed in stadiums for as many as 30,000 people. She has been featured Vogue, Entrepreneur, and other magazines. Natasha currently tours the world using her words to enlighten, create equality, and, spread truth and forgiveness in the tradition of so many great leaders before her.