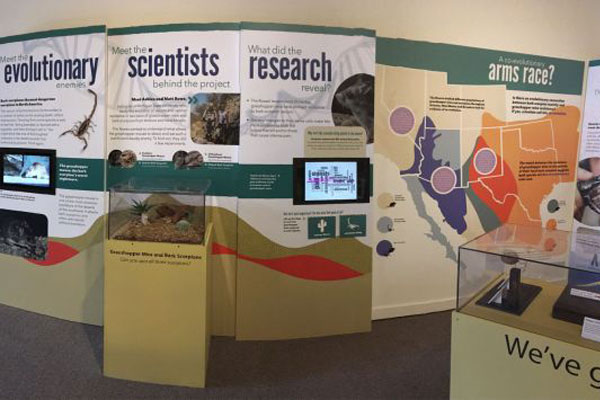 Evolution is happening around us in an observable way: that is the focus of a series of exhibits at the Michigan State University Museum.

The Evolution in Action gallery explores evolution of biological systems and technologies – evolution in living things, and also in computers and engineering. The exhibit, “50,000” reveals an ongoing experiment where scientists have observed bacteria growing, competing, and evolving for 50,000 generations in only 23 years.

In 1988, Richard Lenski, Hannah Distinguished Professor of Microbial Ecology, and his research team began an experiment of E. coli bacteria: from a single bacterium – the common ancestor – Lenski started 12 populations of bacteria in separate flasks. The populations began evolving in separate but identical environments for over 50,000 generations. Now, for more than 23 years, researchers have followed the growth, reproduction and evolution of these bacteria. The bacteria in all 12 populations have become bigger and faster growing. A major finding: one of these populations has even evolved the ability to consume a new food resource. Researchers, including Lenski and a number of MSU graduate and undergraduate students, investigate how these bacteria are successfully competing and winning as they evolve.

“50,000” was developed in partnership with BEACON Center for the Study of Evolution in Action, based at Michigan State University. Here, researchers approach evolution in an innovative way, bringing together biologists, computer scientists, and engineers to study evolution as it happens and apply this knowledge to solve real-world problems.

New additions to the Evolution in Action gallery include an Evo Hub that illuminates the complex evolution processes of variation, inheritance, and selection, acting over time; a large touch screen and other interactive stations that engage visitors with evolution concepts, and highlights from a study of the effect of bark scorpion venom on grasshopper mice researched by Dr. Ashlee Rowe (Assistant Professor in the Neuroscience Program) and Dr. Matt Rowe (Professor in the Department of Integrative Biology). Meanwhile, future exhibits could include topics such as evolving robots that develop ever-more sophisticated collaborative behavior.

BEACON, created with a 5-year, $25 million grant from the National Science Foundation, is a Science and Technology Center with research partners at North Carolina A&T State University, University of Idaho, University of Texas at Austin, and University of Washington.

For this exhibit series, the MSU Museum has introduced a new approach to exhibit-making: components that are designed to be modular, for placement at the museum and easily reproducible for installation in other locations. MSU Museum educators expect the exhibit adaptations to be developed and circulated around the partner universities as well as other learning centers in an effort to help advance public understanding of science.

–BEACON Center for the Study of Evolution in Action

–The Lenski Lab at MSU

Your ticket for the: Evolution in Action Gallery Archived