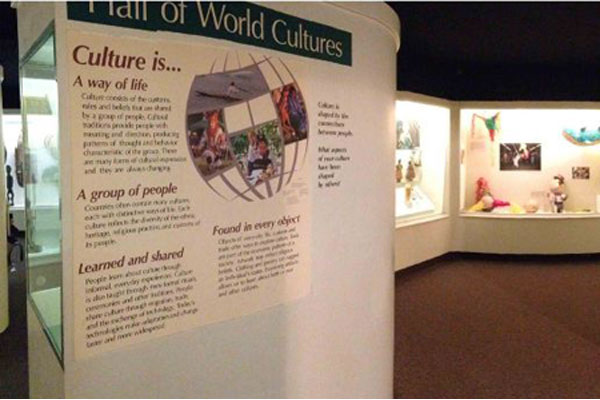 The Hall of World Cultures artifacts offer a view of traditional cultures from all over the world, including Asia, Africa and the Americas. Through an assortment of artifacts originating from different cultures, the exhibit shows the variety and diversity of cultural patterns present throughout societies around the world. The exhibit includes themes of social, economic, political, religious and technological innovations. The artifacts on display range from traditional ritual objects to handmade tools used for survival.

The Hall of World Cultures has a series of display cases comparing similar objects from different cultures or times periods. Diverse: masks from Mexico, Bali, United States, and Hong Kong. Symbolic: marriage traditions as represented by a quilt, wedding rings, cake toppers, wedding vest from Montenegro. Adaptive:teapots from China reflect various materials and resources available regionally and over time. They are made of crystal, clay, copper, porcelain and jade. Dynamic: clocks, which include a pendulum, electric, and an image of a sundial. Culture through objects consists of dolls from Uganda, the United States, Native American, and England.

Artifacts and objects on display are grouped by world region.

Your ticket for the: Hall of World Cultures Archived