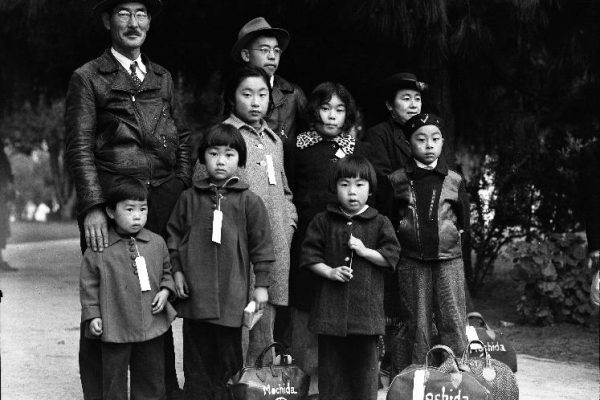 How can we learn from the past? How will you shape the future?

The Righting a Wrong poster exhibition traces the story of Japanese national and Japanese American incarceration during World War II and the people who survived it. Young and old lived crowded together in hastily built camps, endured poor living conditions, and were under the constant watch of military guards for two and a half years. Meanwhile, brave Japanese American men risked their lives fighting for the United States. Some 40 years later, members of the Japanese American community led the nation to confront the wrong it had done—and urged Congress to make it right. Based on an original exhibition at the National Museum of American History, the Righting a Wrong poster exhibition centers around eight core questions that encourage viewers to engage in a dialogue about how this happened and could it happen again. Embracing themes that are as relevant today as they were 75 years ago, the poster exhibition brings forth themes of identity, immigration, prejudice, civil rights, courage, and what it means to be an American.

Righting a Wrong: Japanese Americans and World War II was developed by the National Museum of American History and adapted by the Smithsonian Institution Traveling Exhibition Service. The traveling exhibition and poster exhibition are supported by a grant from the Asian Pacific American Initiatives Pool, administered by the Smithsonian Asian Pacific American Center, the Terasaki Family Foundation, and C. L. Ehn & Ginger Lew.

Your ticket for the: Righting a Wrong: Japanese Americans and World War II