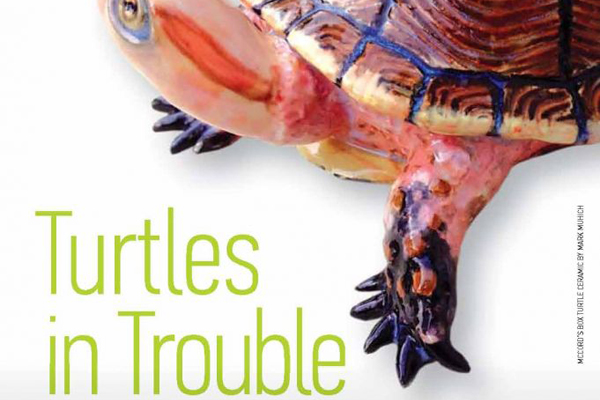 Turtles survived the great extinction that ended the reign of the dinosaurs 65 million years ago, and they withstood the ice ages that ended just a few thousand years ago. Today though, life is tough for turtles, and that is the subject of a new MSU Museum exhibit, Turtles in Trouble.

“Now turtles are in serious trouble,” observes MSU Museum naturalist Jim Harding, who also teaches in the Department of Zoology. “At least two-thirds of turtle species worldwide are declining and threatened with extinction, and several species have become extinct in the wild over just the last few years.”

Turtles are long-lived
The vast majority of turtles and tortoises bury their eggs and then leave them to their fate. That’s OK because baby turtles are good at taking care of themselves. Unfortunately though, predators eat most turtle eggs and many of the baby turtles that do hatch. Fortunately for those turtles that do survive, they are very long-lived compared to most other animals. For example, Michigan’s little Eastern Box Turtle can live over a century, and most other species can live nearly as long. So, if a turtle is lucky enough to reach maturity, it may be able to breed for many decades.

Here comes trouble
“Anything that causes the older turtles to disappear faster than they can be replaced will quickly lead to declining turtle numbers-and perhaps to local or (eventually) even total extinction,” Harding explains.

“While natural disasters can certainly harm turtles, it has been human activities over the last few decades that have severely damaged turtle and tortoise populations,” he notes, “People cut forests, plow up grasslands, and drain or pollute wetlands, lakes, and rivers.”

“But perhaps even worse is the smashing of thousands of turtles on roads and the mass-collection of millions of turtles (and their eggs) for human food, folk medicines, and pets in many parts of the world,” adds Harding.

Turtles in Trouble features turtles commonly seen in Michigan – Snapping, Softshell, Box, Wood, Painted, Slider and others. Also shown are examples from Asia and the “turtle trade,” where turtle species went from “common” to “endangered” or even “extinct in the wild” (bred only in captivity) within a very few years: Yellow-headed Box, South Asian Box, Indochinese Box, Keeled Box and more. In addition to select MSU Museum collections, the exhibit includes life-like turtle sculptures by artist and environmental columnist Mark Muhich, of Jackson, Mich.

Register for Exhibition: Turtles in Trouble

Your ticket for the: Turtles in Trouble