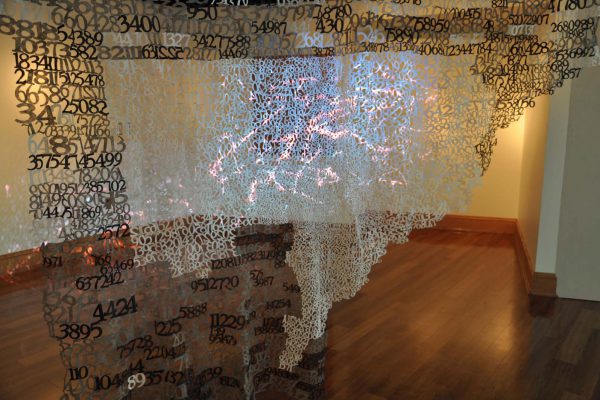 Xia Gao is a visual artist who primarily works with textile/fiber, installation, printing and mixed media. Her works often address personal and cultural adaptation and transformation; dialogues between past and present, East and West, nature and culture are recurrent themes in her work.
She received her B.A. and M.S in Fashion Design from Dong Hua University (formerly China Textile University) and her M.F.A. in Textile Design and Art from the University of Wisconsin-Madison.
“Urban Factors” is part of an ongoing project “Changing Urban Landscape,” initially inspired by the shocking contrasts between fast transforming Chinese urban spaces. See an installation video here.
This project was funded in part through the College of Arts & Letters Undergraduate Research Initiative (assisted by Aubrey Owada, College of Arts & Letters, Honors College) fostering inquiry, collaboration, experimentation and expression.
The video for “Urban Factors” was made by award-winning Spanish film artist Lois Patiño.
This exhibition at the MSU Museum is presented in conjunction with “Detroit Resurgent,” a photographic project exploring worker identity, inspiration and transition, on view downstairs in the museum foyer and ground floor galleries.
Art-Science-Creativity at Michigan State University
Art and science are often thought of as occupying opposite ends of the spectrum of human endeavor: rational, analytical thought at one end and free, creative thought at the other.
But the lines between art and science can become blurred, and museums like the MSU Museum present topics that can be understood from a number of different perspectives that help us understand in new ways, allow for new possibilities, and appreciate the very nature of creativity and innovation.
In “Urban Factors,” the scientific and artistic aesthetics become one. Visual artist Xia Gao materializes Detroit’s racial separation in a “lace-looking” map, which is composed of numbers drawn from actual data from social and urban studies on the Detroit metro area.
The numbers spring forth from the scientific data to become the art, while reminding us that the original data set has its own artistic qualities. The tangible numbers are overlaid with video projection, which presents an abstracted movement of life’s cycles in and around the numbers.

What results is a thought-provoking intersection where visitors are challenged to explore the blocking, rather than welcoming, reality of Detroit’s urban landscape.

MSU Museum and Creativity
In identifying the skills essential for global competitiveness in the 21st century, more and more commentators and agencies advocate the need to fuse the three “Rs“ with the four “Cs“ (Critical thinking and problem solving, Communication, Collaboration, and Creativity and innovation). The future will be defined by intersections of disciplines, which in turn create new products and new ideas. Jobs will require simultaneous mastery of multiple changing fields rather than mastery of one field.

Museums have a vital role in this engagement with future needs of school and college students and the general public alike. The MSU Museum can draw on its collections and partner networks across multiple disciplines to explore and reveal the new synergies that are being created through disciplinary collaboration and fusion, and through investigation into the very nature of creativity.

Your ticket for the: Urban Factors