Butterflies are Good to Think: Healing Partnerships with the Sister Survivors

In his January 2019 letter, MSU Museum Director Mark Auslander considers the deepening partnership between the Museum and the sister survivors and allies associated with the vast sexual abuse crisis that has been centered on MSU. Emerging out of the teal ribbon conservation project, described in the August 2018 Director’s Letter, the Museum is developing a collaborative exhibition, “Finding our Voice: Sister Survivors Speak,” set to open in April 2019. Auslander reflects on a key art work in the show, Alexandra Bourque’s silk-based sculptural rendition of hundreds of vibrantly colored butterflies, collectively clothing a female human figure.

As we celebrate the New Year, the Museum is delighted to acquire a work of art highlighting themes of transformation and new beginnings. Alexandra (“Alex”) Bourque’s Untitled (2018) sculpture presents 300 brightly colored silk 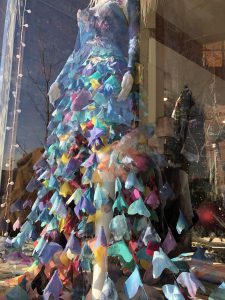 cut outs in the shapes of butterflies, suspended on nearly invisible threads forming a multicolored dress on a female figure.

Alex, a sister survivor of the vast sexual abuse crisis centered on MSU, first hand dyed sheets of silk in vats at her company, Brightly Twisted, in Detroit’s historic Corktown district. She then cut out butterfly shapes, rendered them firm with “mod podge: glue, and attached them to guide wires radiating out from a central mannequin. The butterflies are dyed in red, purple, orange, yellow and predominantly teal, the color of the struggle against sexual violence. As such, the piece evokes all that the survivors underwent at earlier moments, during times of physical violation and when they faced waves of disbelief and denial. Alex writes that she is inspired by the line often attributed to Maya Angelou: “We admire the beauty of the butterfly but we rarely admit the changes it has gone through to achieve that beauty.”

The artist has placed the dress on a base composed of recombined shards of reflective glass, evoking processes of rupture and repair. The work will be a centerpiece of our forthcoming exhibition, “Finding our Voice: Sister Survivors Speak,” opening April 16, 2019, collaboratively curated with survivors and family members associated with the crisis.

Alex’s piece honors both the survivors who have bravely lent their voices to the struggle against sexual violence and her family members, friends, and co-workers who have supported her across the years, especially as she made the difficult decision to publicly identify herself as a survivor. As such, the work for all of us at the Museum resonates with the fascinating process of collaboration we’ve been party to since July 2018, when (as described in my August 2018 letter) we began working with mothers, survivors, and allies to safeguard and collect the teal bows and ribbons tied around the trees of the MSU campus, as tributes to hundreds of sister survivors.

Our initial expectation had been that the Museum staff would undertake the professional responsibility for conserving the bows, which in many instances were marked by the egg sacs and cocoons of their former gypsy moth residents, and which had faded and frayed under exposure to the elements. Over the course of the fall, a new plan emerged: a core group comprised of mothers of survivors volunteered to undertake primary responsibility to conserve the tribute objects, working as “citizen-curators.” The Museum was able to bring in the experienced textile curator Jane Hammond from the ICA firm in Cleveland, Ohio. In a day long workshop, hosted by the University’s Department of Art, Art History and Design, Jane walked the team through conservation techniques, including repeatedly bathing the ribbons in de-ionized water. Our plan is that the restored ribbons will be ready for display by the April 2019 opening of the exhibit, and may be installed on the gallery’s ceiling, evoking a sheltering canopy of foliage, above the exhibit exploring the role of the trees as witnesses. The ribbon canopy will, to our minds, embody the shared labor of care and repair that binds together all of us as partners, from the Museum and from the impacted families.

Alex is considering creating more silk butterflies, perhaps initialed by sister survivors, that will, in effect, fly up from the female figure towards the ribbon canopy. She may also create, in an allied project, a series of large cloth cocoon-like forms, leading up to the brightly colored butterfly dress; visitors may be able to encase themselves in the cocoons, to take on the embodied sensation of being enclosed in an intermediate state of stasis, caught “betwixt and between,” on the eve of becoming something else. She notes that like many survivors of sexual violence, she went through a painful phase in which it seemed difficult to imagine a productive future, of ever fully being at ease in her own bodily being. And then, miraculously, she found her sense of selfhood restored, and emerged from her own cocoon, transformed and liberated.

The process, she notes, is not uni-directional; like many, she knows what it is like to retreat, on difficult days, back into the cocoon’s all encompassing, even claustrophobic, enclosure. Her full site-specific installation will offer visitors the possibility of moving back and forth between different subject positions, in different moments of becoming, during an extended healing journey. 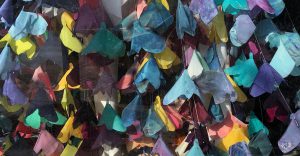 Out of Many, One

Appropriately, in Alex’s work of art, the space of positive transformation is not signaled by a single winged insect, but by hundreds, combining to clothe a single resplendent female figure. The remaking of the world after violence is rarely achieved through individual action alone, but is anchored in processes of reciprocity, compassion, and solidarity, as we come to recognize, as Martin Buber long ago noted, the indissoluble bonds between “I” and “Thou.” Like all members of our Museum team, I find myself every day challenged, and restored, through the remarkable journey we are currently engaged upon as we work with the survivors and allies, collaboratively producing this unexpected, improbable exhibit, on the very campus that was the “scene of the crime.” It seems to us nothing short of miraculous, that out of such pain and injustice, out of such a shocking history of denial and betrayal of trust, that a meaningful project of friendship and mutual respect is being forged.

The Model of Nature

The great anthropologist Claude Levi-Strauss famously remarked that animals and plants are not only good to eat, they are “good to think.” In particular, the relations between natural, non-human species, of contrast and difference, cognitively help us all explore the most elusive aspects of lived experiences of the human world, as we navigate the web of significance—of fear, loss, restoration and hope—that constitute human culture.

Such is the case with Alex Bourque’s inspirational sculpture. Her iridescent dress is made up of hundreds of distinct elements, evoking multiple species of butterfly, reminding us of the gloriously diverse web of life throughout our planetary biosphere. Each of the sister survivors remains a unique, distinctive individual, even as each has found strength through connecting with her other sisters, bound together by a history of common suffering and by an increasing willingness to rise up and speak truth to power.

To my mind, the power and poignancy of Alex’s butterfly dress is intensified by the fact that global butterfly populations are increasingly endangered, under conditions of global climate change and environmental toxicity. Butterflies and moths, which play such important roles in biological food chains, are significant early warning indicators of stresses in local ecosystems. Decreasing migration clusters, most notably of the splendid Monarch butterflies, are a tangible reminder of planetary biodiversity at risk. Alex’s colorful, three-dimensional mosaic makes visible a once wounded person restored to health through the collective action of a diverse colony of living organisms. The work makes manifest an inescapable truth of our age: our salvation rests, first and foremost, in recognizing our indissoluble bonds with one another, across zones of suffering and of hope, bridging the gulf between the human and non-human. We stand, as bearers of human culture, both within and outside of nature. Paradoxically, we are most human, and most fulfilled in our human potential, when, through the arts of culture, we come to grasp our unity with the glories and mysteries of nature’s beings.

Your ticket for the: Butterflies are Good to Think: Healing Partnerships with the Sister Survivors

Butterflies are Good to Think: Healing Partnerships with the Sister Survivors