Darwin and the Manatee

In his February letter, Museum director Mark Auslander reflects on the Museum’s specimen of a manatee, also known as a sea cow.  Studying creatures such as the sea cow and its similarities to land-based mammals appears to have aided Charles Darwin, whose 209th birthday we celebrate this month, as he developed his world-transforming theory of descent through natural selection.

Mindful of Charles Darwin’s approaching 209th birthday on February 12, I have been pondering one of the most intriguing specimens in our vertebrate collections, an articulated skeleton of a juvenile West Indian manatee (Trichechus manatus) or sea cow, which the Museum acquired more than a century ago. I recently met on the Museum’s second floor landing with a group of our Ecology, Evolutionary Biology, and Behavior (EEBB) graduate students —Robert Mobley, Julie Jarvey, Olivia Spagnuolo, Sarah Bodbyl-Roels, Ani Hristova, and Olivia Utley—to look at the manatee skeleton, which Laura Abraczinskas, our vertebrate collections manager, kindly brought out of the research area for the morning. We considered the manatee in light of the large proboscideans (represented by our elephant skeletons and a Columbian Mammoth fossil) towering over the stairwell.  Looking carefully at the skeletons, we talked about why early biologists, long before they had knowledge of DNA or an extensive fossil record, grouped together these different “sub-ungulates” and were confident they were comparatively close relations.  How, we asked ourselves, might we use these specimens to help expose our younger visitors to the exciting study of biological evolution?

Perhaps we should start, graduate student Sarah Bodbyl-Roels suggested, simply by having young visitors stare intently at the manatee’s skeleton, without even telling them the name of the species or where it normally resides. What can they infer just by looking? The lack of hind legs and the flattened front leg appendages provide a hint that this is an aquatic animal.  The heavy bones, in striking contrast to the lighter or more gracile bones of cetaceans (including whales, porpoises, and dolphins) suggest that this is not a creature prone to leaping and dashing, but rather a sedentary being, who often feeds on the bottom of shallow waters. An observant young visitor might pick up on the raised location of the nasal and sinus passages, which are well suited to breathing on the water’s surface, without fully exposing the head.  After they have carefully looked at the skeleton, a docent could show them video footage of manatees in their natural aquatic habitats.

Next, a young visitor might compare the manatee skeleton to that of the adjacent Asian and African elephants, and our half million-year old Columbian Mammoth fossilized cranium. There too we see raised nasal passages and heavy bone structures. The teeth of all these creatures indicate they are all herbivores (indeed, manatees, found in Atlantic and Caribbean waters, and the related dugongs, found in the Indian Ocean and the Pacific, are the only aquatic mammals that are exclusively vegetarian, just like elephants.)  A young person might even hazard a guess that manatees and elephants share a common, land-dwelling ancestor.

In thinking this way, our young visitors would be reproducing the thought of 19th century biologists, including Charles Darwin himself, who were increasingly convinced of the common ancestry of “subungulates,” including Sirenia (the order that includes manatees and dugongs), Proboscidea (including elephants), and hyraxes.

Darwin delighted in noting surprising similarities among organisms that had initially seemed unrelated or which were located in profoundly different environments. In The Voyage of the Beagle (1839), written long before he had articulated his grand theory of descent through natural selection, he described his excitement in acquiring an early fossil of the Toxodon, among the largest South American extinct mammals. The Toxodon, he noted, shared a number of intriguing anatomical features with manatees and dugongs, “How wonderfully,’ he exclaimed, “are the different Orders, at the present time so well separated, blended together in different points of the structure of the Toxodon!” The statement in some respects anticipates one of the most famous lines in the history of science, Darwin’s conclusion to The Origin of Species (1859), written two decades later,

“There is grandeur in this view of life, with its several powers, having been originally breathed into a few forms or into one; and that, whilst this planet has gone cycling on according to the fixed law of gravity, from so simple a beginning endless forms most beautiful and most wonderful have been, and are being, evolved.”

We would like, whenever possible, to take our visitors on intellectual journeys that reproduce the pathways of discovery taken by Darwin and other scientists. Our goal in the Museum, whenever possible, is not to lecture to our younger visitors, but to encourage them to engage in hands-on active learning and discovery, proposing interpretations and posing new questions as they plunge directly into the scientific method.

After this session of “slow looking” at the skeletons, a docent might next show visitors pictures of recent fossil discoveries of early sirenians, and share imaging of relevant DNA sequences that demonstrate close evolutionary relations among modern manatees, dugongs, hyraxes, and elephants.  With these materials in mind, our visitors might move on to other parts of the Museum, to discover on their own more insights into the unfolding story of biological evolution. 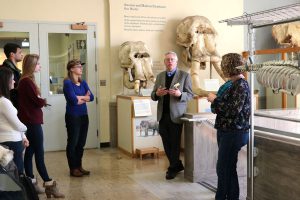 We are a museum of culture as well as natural science, and our manatee skeleton can also provide our visitors with a window into cultural history.   Manatees and dugongs are grouped together in the order Sirenia because early sailors are said to have mistaken these aquatic mammals for mermaids or “sirens,” the beautiful female beings who were thought, in Homer’s time, to lure sailors to their doom. We might ask young visitors to draw the manatee skeleton and then illustrate their own conceptions of the mythical mermaids which these creatures perhaps inspired.  They might also learn that in indigenous communities around the world, sirenia are often held to be important ambassadors of spiritual realms. The Rama indigenous people of coastal Nicaragua hold that the manatee willingly gives its flesh to human hunters, who must honor it by returning its bones to the location where they hunted it.  In Okinawa, where dugong are held to be sacred, their appearance is sometimes invoked as a meaningful sign by peace activists struggling against military bases.

Some visitors might find it interesting to learn about the history of this specific manatee specimen, which the Museum acquired from Ward’s Natural Science Establishment, of Rochester, New York, probably prior to 1900.  Henry Augustus Ward, a renowned taxidermist and collector, provided important specimens and artifacts to scores of American museums in the late 19th and early 20th centuries.  (As a child growing up in Washington DC, I often marveled at the “Ward Collection” of African artifacts in the Smithsonian National Museum of Natural History, including a grand map of Africa composed of African iron weapons collected by Henry Ward.)  Our own famous curator of the early 20th century, Professor Walter B. Barrows, had a close connection to Ward. Immediately after graduating from MIT, Professor Barrows’ first job was as an assistant at Ward’s Natural Science Establishment. Some of our earliest plaster casts of fossils were obtained from Ward’s, and generations of our students have learned from these invaluable resources. 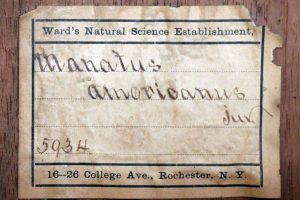 Gazing at the juvenile manatee skeleton, we can only speculate as to the precise circumstances that led to this animal being taken from its home environment. Professor Daryl Domning of Howard University, one of the world’s foremost specialists on sirenians, notes that he’s seen manatee specimens from Ward’s in several museums. He suspects they were collected in Florida by Ward’s hired hunters, who were paid up to one hundred dollars for a skeleton in 1880.  Manatees were also hunted for meat, so the bones might have been a byproduct of this commerce, before these remarkable animals were subject to conservation protection laws.  Manatees in nature have few natural predators, other than sharks, but are highly vulnerable to human hunters. I do wonder what this gentle young manatee’s life was like, among its close relatives, before it so abruptly died at the hand of man.

All Things Bright and Beautiful

Each February 12, we rightly celebrate Charles Darwin’s birthday and reflect on the remarkable scientific revolution he helped initiate, which has so profoundly transformed our understandings of the natural world and our place within it.  Might we also on that day give a thought to the untold thousands of animal specimens, like “our” juvenile manatee, that were collected (and often intentionally killed and preserved) so that Darwin and many other biologists could carefully and rigorously untangle the magnificent, branching tree of life, which we now realize stretches back 3.7 billion years?  Darwin helped us grasp, in so many important ways, our deep kinship with all creatures, great and small. On his birthday, as we honor his life, let us also celebrate the lives of all the organic beings, our close and distant family relations, who have helped us understand how, in Darwin’s immortal words, “endless forms most beautiful and most wonderful have been, and are being, evolved.”

Your ticket for the: Darwin and the Manatee

Darwin and the Manatee