Of Bicycles and Martian Voyages

In his March 2018 letter, MSU Museum Director Mark Auslander describes a recent visit to the Johnson Space Center and reflects upon the Museum’s new collaboration with the non-profit ITEC/2020Girls program, as middle schoolers in Lansing design a self-sustaining Martian City of the future. The non-profit ITEC works to increase the technology skills of Lansing-area students in creatively designed after school programs. 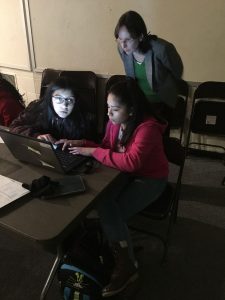 Last month, I attended for the first time the annual conference of the Association of Science Museum Directors, held at Space Center Houston, a marvelous museum on the grounds of NASA’s Johnson Space Center (“JSC”) in Houston, Texas. Science museum directors from all over North America practically shrieked with childish excitement as we visited the old Project Apollo mission control, toured the astronaut training mockup of the International Space Station, marveled at the ISS hyper-modern mission control, met Valkyrie (a prototype robot being developed to build human habitats on Mars) and peered into the Orion space launch vehicle that, if all goes according to plan, will in 2030 launch humans on our first journey to Mars.

Of all the sights we beheld that week, the thing that most enthralled me on the 16,000 acre JSC campus was, quite to my surprise, the center’s free range bicycle program, composed largely of lovingly maintained old Schwinn bicycles, many dating back to the early 1960s, when the facility was established. These gearless vehicles are the very vintage of bikes I rode as a child, when I was, as it happened, obsessively enthralled with every detail of the Project Apollo space program. Repaired each week by dedicated engineers, these bikes belong to no one except for NASA and are ridden freely from building to building by thousands of staff members, left outdoors on unlocked bike racks to be picked up and pedaled away by someone else.

Looking with the eyes of a sociocultural anthropologist who has long studied ritual and sacred landscapes, it occurred to me that the entire JSC could be thought of as a vast global pilgrimage site, a kind of portal to an alternate universe that subtly branched off from our own spacetime continuum at the dawn of the space age. In this sector of the multiverse, one could almost imagine, JFK, RFK, and Dr. King were never assassinated, the Vietnam War never happened, and all of humanity remained bound together by the limitless optimism of space exploration and the promise of the “Final Frontier.” The JSC struck me as a kind of living dream-space, a monument to a lost future, of hope and optimism and faith in the possibility of science and technological triumph, a faith that seems terribly imperiled in our dystopian age, when even the scientific method can be derided as “fake news.” Each time an astronaut-trainee, an engineer, or any staff member rides one of those gleaming Schwinn bikes, I find myself imagining, they are crossing over from our anxious, nearly future-less world into that alternate cosmos, a time when we could almost touch the distant stars.

I have found myself thinking of those bikes and that irrepressible enthusiasm for the future each Tuesday afternoon, lately, as Museum staff members and I have gathered—with our colleagues from the 2020Girls/ITEC non-profit and the MSU Abrams Planetarium—to work with ten 7 – 9th grade young women on their current after-school project. They are designing, with our help, a Martian city, which they plan to exhibit at the MSU Science Festival in the Museum in mid-April. They are grappling with a range of technological challenges: How to maintain a stable, breathable atmosphere? How to stay fit and healthy in one third Earth gravity? How to guarantee a nutritious food supply, meet the colony’s energy needs, shield frail human bodies from cosmic radiation and the low temperatures of the Martian surface, protect delicate machinery from dust storms, and manage communication with earth across the chasm of many light minutes?

As they plan out their Martian domed city on laptops using the application SketchUp, the girls ponder basic questions of morality and political philosophy: Should there be money in their Martian city? Will there need to be police and law enforcement? Last week, they argued about the TV show “The Walking Dead,” in which living people, constantly surrounded by the dangers of zombies, support one another without the need for money or a court system. Could that work, we asked, on Mars, where the dangers from the surrounding environment would be just as deadly as any zombie? Would those ever-present risks be substantial enough to drive everyone to cooperate without the need for positive rewards or negative sanctions? (The consensus they arrived at is no: risks and dangers here on Earth haven’t caused human beings to cooperate altruistically, and there’s no reason to think things will be any better on Mars!) The group has decided that low gravity basketball courts are a necessity, but have, amidst much laughter, vetoed golf courses; “The golf ball will just take forever to come down!”

One of the most intriguing discussions has been whether or not there should be product brands on Mars. They’ve argued back and forth on this. Rivalries over Nike vs. Adidas cause no end of trouble in their own neighborhoods, they noted, but brands are also, they acknowledged, kind of fun.

Recently, I told them I had gotten to meet Dr. Ellen Ochoa, the first Latina astronaut and current director of the Johnson Space Center, a PhD scientist who sits on the National Science Foundation board. They all knew about Dr. Ochoa, whom they’d studied back in second grade, but were skeptical I’d really met her. “Everyone knows,” they told me, “she was on the first mission to dock with the international space station, way back in, like, 1999. Are you sure she’s really still alive?” (1999, being to their minds, way back in ancient times!)

Watching these young women’s excited faces, as they struggle over each new technical and sociological problem, brimming with confidence and humor as they argue each point, I am reminded of what Dr. Ochoa told our group of science museum directors, when we asked her what the most important part of her job is. Each day, she told us, as she presides over staff meetings, she does her very best to ensure that every single person present, from the most senior space program veteran to the youngest, newly-hired scientist, is attentively and respectfully listened to. Following each of NASA’s disasters, she reminds everyone, we later discovered there had always been an engineer, technician, or scientist in a room somewhere, often a young woman or a person of color, who was ignored or interrupted, or who was sure she wasn’t supposed to speak about a design flaw in the mission protocol. “Each time that happened,” Dr. Ochoa quietly told us, “people died.” “My job is to make sure that this time around, we listen to everyone, and don’t waste anyone’s gifts.”

Each time we work with the 2020 Girls seventh graders, that is what we on the MSU Museum team tell ourselves. Here are the young people who in 2030 will be in their mid-twenties, perhaps piloting the first human mission to the red planet, and who in 2050 may be inhabiting the first Martian city, solving technological and cultural challenges that those of us, in an older generation, now think unsolvable. If our species is to survive the challenges of climate change, environmental crisis, and nationalist rivalries, we simply can’t afford to miss out on the promise of any of these remarkable minds or of millions of others like them.

Last week, the young women decided that in the middle of their colony dome they needed green-space, a central park with trees and flowers and a lake for swimming, under intensified, refracted sunlight, all encircled by a winding trail. Looking at their drawings of the path through the woods, millions of miles from Earth, I could make out little bicycles, gliding quietly and serenely over an unimaginably distant landscape. Once again, in my mind’s eye, I behold the Schwinn bicycles of my youth. Each pedal-powered vehicle is a free-range beacon of hope and optimism and boundless possibility, opening a wormhole through the multiverse back to the treasured land we had thought lost in childhood. Each gleaming bicycle reflecting a far-off sun, resplendent with our restored, common faith in the future’s undiscovered country.

Your ticket for the: Of Bicycles and Martian Voyages

Of Bicycles and Martian Voyages