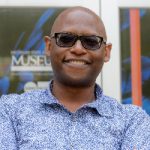 Julian C. Chambliss is the Val Berryman Curator of History at the Michigan State University Museum and Professor of English with a joint appointment in History at Michigan State University. In addition, he is a core participant in the MSU College of Arts & Letters’ Consortium for Critical Diversity in a Digital Age Research (CEDAR). His research interests focus on the race, identity, and power in real and imagined urban spaces. His recent academic writing has appeared in Frieze, Rhetoric Review, Boston Review, Florida Historical Quarterly, Journal of Urban History and Studies in American. An interdisciplinary scholar he has designed museum exhibitions, curated art shows, and created public digital history projects that trace community, identity, and power in the American South. In addition, he has published opinion and commentary in popular forums such as the Los Angeles Times, National Public Radio (NPR), and Orlando Sentinel.

Your ticket for the: Julian C. Chambliss