From ‘Lucy” to Lego Robots: Tools and the Making of Community

Museum Director Mark Auslander reflects on the many meanings of tools, inspired by the Museum’s partnership evening event with the Lansing non-profit Information Technology Empowerment Center” (ITEC)— in which children raced their robots through the Museum’s ground floor galleries of Evolution and World Culture. Beyond their obvious technical uses, what precisely do tools accomplish for us as social animals?

Last Wednesday night the halls of the Museum were filled with the sounds of whirring gears and giggling children. The Museum staff partnered with the Lansing non-profit, the “Information Technology Empowerment Center” (ITEC) to host a set of after-hours activities, grouped around the theme of tools and technology, old and new. In the ITEC summer camp, based in the Foster Community Center, young people from the 4th to the 8th grade levels have been learning to create and code robots, and to digitally design space launch vehicles capable of traveling to Mars. Now, we gathered for another kind of journey: children took turns racing their robots through the Museum’s ground level Halls of Evolution and World Cultures, which form a great maze-like semi-circular arc. 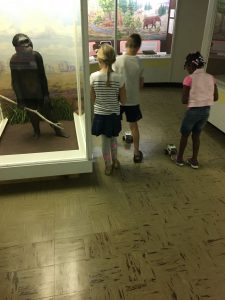 The young people divided up into three teams, named for different museum icons: the Allosauruses, the Brown Bears, and the Fur Traders. On other floors, the teams learned, along with their parents and grandparents, how to create ancient tools, free- build dinosaur skeletons out of legos, and operate Augmented Reality iPads, allowing them to “see” hidden data overlaying our bricks and mortar installation on Michigan wetlands.

My favorite moments of the evening came as each team raced their wireless-controlled robots past our life size model of Lucy, the early hominid Australopithecus Afarensis who lived 3.2 million years ago. In this display, Lucy (known as DInkinesh or “You are Marvelous,” in the Ethiopian language of Amharic, or as AL 288-1 to paleo-anthropologist) holds a long branch in her right hand. For one instant, repeated again and again through the evening, it looked as if Lucy was pointing her stick directly at each passing robot, as if illustrate over three million years of tool use.

That striking image made me reflect upon the vast array of tools found in the museum’s voluminous collections: among them, ancient stone projectile points and bone scrapers used millennia ago in paleo Native American communities; an ancient Egyptian cosmetic jar; medieval arms and armor; 19th century agricultural tools, from saws to scythes; looms, boats, and sewing clamps (or “third hands”) of all shapes and sizes: a wooden hat form for making Hawaiian woven hat; at least forty antique typewriters, a marvelous collection of early vacuum cleaners, and, one my very favorites, a dog powered treadmill for operating a butter churn!

What do Tools Do?

What precisely do all of these tools have in common, from Lucy’s branch to the latest digital inventions? In a purely technical sense, they are instances of human ingenuity, of the ancient struggle to harness and redirect energy in order to extract and transform natural forms into useful cultural products. Yet tools also have vital social functions: they are the building blocks out of which people produce our identities as social beings and through which we build and reproduce the bonds of human community.

Take one example from the Ngoni village communities of eastern Zambia, where I’ve undertaken fieldwork for several years as a sociocultural anthropologist. In Ngoniland, the birth of each child is celebrated with a special ceremonial act, emphasizing that tools help make us who we are. The father of the infant carves a piece of wood into a tool and hands it the newborn: if a little girl, he carves a pounding stick and says aloud, “Go pound grain.” If it is a little boy, the father carves a knobkerrie throwing club and says, “Go herd cattle.”

There’s a wealth of meaning attached to each of these instruments. In a tradition-based Ngoni village, pounding grain is considered women’s most important labor, and has close associations with the reproductive labor of conceiving and gestating the next generation of human offspring. A girl first learns to pound grain in the compound of her mother and grandmother, and then, following her marriage out of the village, she will pound in the compound of her husband and mother in law, providing the wherewithal of life to her new family. Boys in turn will learn the skills of manhood herding their cattle through the bush, safeguarding them from wild animals and human enemies through their growing skill with the deadly throwing club. This cattle herd will in time provide the basis for the bridewealth cattle that will bring a new wife into the village and allow the young man to attain social adulthood by starting a family of his own.

Tools, each young Ngoni child learns, have a kind of personality, closely identified with the person who has used them. Pounding sticks are often lent out between women, through networks of family and friends. An observant child can tell the curious anthropologist who precisely has used which stick and how each woman’s pounding styles differ, Knobkerrie throwing sticks are no less imbued with the personae of their users, and are bound to tales of hunting prowess and valor in battle. The circulation of tools over time provides a map of the social universe, illustrating all the different ways that people are linked to one another—as friend or foe. 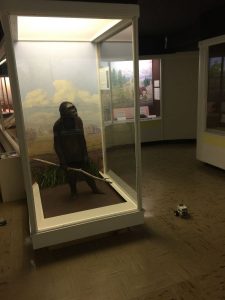 We know that our closest relatives in the chimpanzee family use tools to extract natural resources, including sticks to fish for tasty termites. It isn’t entirely clear if chimpanzee tools build social bonds, but the archaeological record is replete with evidence that early human tool use helped to create social networks and social identities. Over 30,000 years ago, our ancestors were actively creating art on the walls of caves, using an array of tools to scrape, etch and paint surface to create a dizzying array of complex scenes drawn from nature. The precise function of these art works remains obscure, but there is considerable evidence that these human-altered caves functioned as enormous symbolic wombs, through which successive generations were initiated and reborn as social beings, fully integrated members of a social community. We’ve been using tools, in one way or another, to forge communal bonds ever since.

Late on Wednesday night, we saw another instance of this ancient tradition. Eight year-old Donald, who spent the summer in robotics camp, raced his wireless robot through the Halls of Evolution and Culture with ease, reaching the beloved diorama of the ancient Aztec city of Tenochitlan far in advance of his teammates. Yet Donald paused before letting his robot exit the Hall of World Cultures, and kept it circling in a holding pattern until the other “Brown Bear” team members’ robots caught up. Then he swiveled his robot in a final circle, so all the robots could cross the finish line together. The teammates then happily raced off together to the next activity, completing a challenging robot obstacle course in the Education Station.

Donald’s gesture was a small one, but it was nonetheless a striking reminder that tools are not solely technical devices for traversing and controlling the external physical environment. They are, at the end of the day, the meaning-filled means through which we extend our minds and our personhood into the realm of human society, either to diminish or expand the great circle of human community. Through his iPad-controlled robot, a tiny model of his own skill and versatility, Donald made a choice, to unite with his teammates rather than revel in a moment of individual glory. Not a bad lesson to draw from a memorable Night in the Museum.

The Museum would love to hear your stories about a meaningful tool in your own experience. Is there a tool that somehow linked you to another person, or taught you a significant life lesson? Please drop us a line and let us know if we may share your tool tale on our website.

Postscript: Our undergraduate Museum communications intern, Erik Rujan, has launched our latest tool, our twitter feed from the museum’s beloved Brown Bear, @MSUMuseumBear. If you use twitter, please follow him. (Last I checked, he had 54 followers— but he’d love some more.). Those who don’t use twitter can still read the Bear’s postings at https://twitter.com/MSUMuseumBear

Your ticket for the: From ‘Lucy” to Lego Robots: Tools and the Making of Community

From ‘Lucy” to Lego Robots: Tools and the Making of Community