Game of Wolves: The Dire Wolf between Nature and Culture

In his June 2019 letter, MSU Museum director Mark Auslander reflects on the Museum’s display of a dire wolf, a powerful predator here in North America that became extinct around 9,000 years ago. In recent years, the image of the “direwolf” has seized the global imagination, thanks to the novels of George R.R. Martin and the HBO series Game of Thrones. What do we know of actual dire wolves and what meanings are embedded in the modern mythology of the “direwolf”? 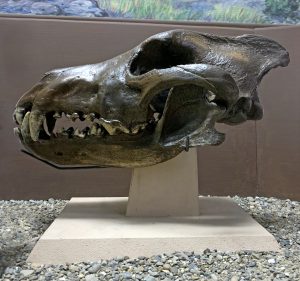 As the global mega-series Game of Thrones has reached its conclusion, visitors to the MSU Museum have been delighted to learn that dire wolves actually existed and that one ‘resides’ in the Museum itself. A dire wolf (Canis dirus) cranium and mandible are on display near the end of our Hall of Evolution. We don’t have a precise date on the specimen (which just might be a cast) but we know that dire wolves lived from the late Pleistocene era into the early Holocene era, roughly 125,000–9,500 years ago, primarily during the most recent Ice Age.

What do we know of actual dire wolves, as opposed to the fanciful creatures that populate George R.R. Martin’s books and the fantasy television series?  They ranged successfully over the area that is now the United States, and as far south as present day Mexico and Peru. They had a robust build and were a little larger and longer-limbed than present day grey wolves, although they certainly weren’t as big as the pony sized animals of Martin’s fertile imagination. Their heads were larger than those of modern wolves. Their teeth and jaw size suggest a more powerful bite force than any present-day wolf species.

Paleontological evidence indicates that they primarily hunted “megaherbivores,” large non-meat eating animals including giant ground sloth, mastodon, yesterday’s camel, western horse, and bison. They don’t appear to have significantly hunted smaller animals such as deer. Their remains have been found in a great range of elevations and environmental settings, which suggests that they were highly adaptable and efficient hunters. For tens of thousands of years, their primary competitor appears to have been  the saber-toothed cat (Smilodon fatalis) and the American lion (Panthera atrox). We assume that like their modern day relatives, they hunted in packs and had a complex social structure. (Our mural painting shows a solitary dire wolf, stalking a Megatherium giant ground sloth, alongside a Smilodon saber-toothed cat.) 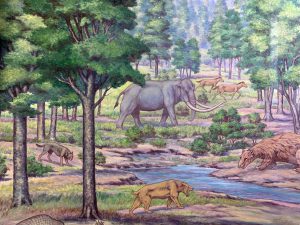 Many dire wolves remains have been recovered from the La Brea tar pits near Los Angeles, California; four hundred skulls are dramatically on display at the museum there. Although no dire wolf remains have been discovered in Michigan, they have been found in southern Indiana and paleontologists surmise they easily could have resided here.

The biggest mystery surrounding Canis dirus is the cause of their extinction, a little more than 9,000 years ago. They died out during the mass extinction wave of the late Pleistocene and early Holocene that claimed many of the megafauna in North America, a wave of species loss which corresponds with the era that saw the peopling of the Americas.  Paleontologists and zoo-archaeologists continue to debate the causes of these mass extinctions; were they driven by climate change, or by increasingly efficient human hunting, or some combination of these and other factors? It seems reasonable that as the megaherbivores disappeared, the pressures on dire wolves increased, leading ultimately to the entire elimination of the species.  For some reason, it appears they were unable to survive by hunting smaller mammals, food sources which were able to sustain other wolf species.  We surmise that they were never domesticated by humans; the ancestors of modern dogs were gray wolves.

The Direwolves of Game of Thrones

As a sociocultural anthropologist, I’m fascinated by how this extinct species inspired Martin and the creators of the modern HBO series to develop a mythic creature that has “populated” the global cultural imagination.  (Several years ago, traveling through Cuba, I was asked by young Cubans about elaborate plot points concerning the direwolves of Game of Thrones, which they had been watching on digital files passed hand to hand on USB drives.)

What precisely is so universally appealing about the direwolves of Game of Thrones?  To put it another way, recall anthropologist Claude Levi-Strauss’ observation that animals are not only good to eat, they are “good to think.” What are the imaginary direwolves “good to think” about? (Warning: Spoilers ahead, and with apologies to those who don’t follow the books or the TV series!)

First of all, these creatures are good to think about the bonds of siblingship. When the books and series open, direwolves are thought to be extinct, like their non-mythic dire wolf counterparts. Yet early on in the narrative, a litter of direwolf pups is discovered by Jon Snow, who distributes them to his Stark brothers and sisters (or at least to those whom he at the time believes to be his siblings). Over the course of the series, one tragedy after another befalls most of these creatures, paralleling the travails and horrors experienced by the Stark protagonists as they are scattered across the world.

Indeed, these direwolf siblings are used to hint at later plot developments experienced by their human owners, all of them Stark siblings. Jon Snow’s discovery of the dead direwolf mother and its newborns, at the very start of the saga, foreshadows his own discovery, near the narrative’s end, that his real mother died giving birth to him. His particular affinity to direwolves, beings that normally reside north of the wall, anticipates his eventual alliance with the Wildlings or Free Folk, who are similarly denizens of the far north. Jon’s direwolf Ghost guards Jon’s corpse and is the first to witness Jon’s resurrection; one might even argue that Jon’s spirit temporarily resides within Ghost, between the period of Jon’s murder and his miraculous return to life.

In turn, Nymeria, Arya Stark’s direwolf, after escaping from the human world becomes the leader of a wild wolf pack and refuses to return to domesticated status; this appears to foreshadow Arya’s own journey of exile, far from anyone she has ever known.

At more painful moments, a direwolf is a kind of negative stand-in for its human other. The cruel death inflicted on Sansa Stark’s direwolf Lady, at the behest of Queen Cersei, foreshadows the terrible trials that Sansa will experience at Cersei’s hands. Ned Stark’s own role in killing Lady may also foreshadow his own execution.  Later, Shaggydog’s decapitated head is presented to the arch-villain Ramsay Bolton as proof of the identity of the captive Rickon Stark, Shaggydog’s owner. 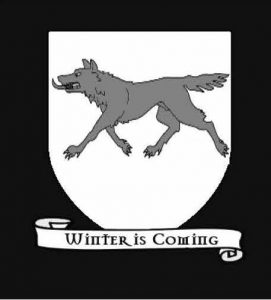 A fictional coat of arms. Coat of arms of House Stark. Shows a gray wolf on a white field. Underneath is a scroll bearing a motto: Winter is Coming. Attribution from Wikimedia Commons TenTonParasol [CC BY-SA 3.0 (https:// creativecommons.org/licenses/by-sa/3.0)]

The direwolf is also good to think about sovereignty.  Sculpted direwolves guard the tombs of the kings of the North in the crypt beneath Winterfell.  The banner of House Stark, we learn, is a lone direwolf on a white field. This imagery is horrifically inverted after the Red Wedding massacre, when the partisans of the traitorous Walder Frey decapitate Robb Stark and his direwolf Grey Wind, and then mockingly stitch Grey Wind’s head onto the headless body of the murdered Robb, as they taunt his corpse with the moniker, “The King of the North.”

In many indigenous cultures, powerful animal species are understood as alternate selves for human persons, and such is clearly the case for the GOT direwolves. The Stark sibling Bran is even able to project his consciousness into his dire wolf Summer, to see through his eyes.  As with many of the dire wolf siblings, though, this mystical bond with its human counterpart is insufficient to save the animal, which dies in combat, buying time for Bran to escape and embrace his destiny as the shamanic Three Eyed Raven.

Many fans around the world have expressed disappointment that direwolves faded from later seasons of Game of Thrones. (Jon Snow in one the final episodes sends his beloved Ghost to travel north of the wall with his Wildling allies, rather than participate with him in the final battle for King’s Landing; at the end of the final episode, Ghost welcomes him back to the Night’s Watch and accompanies Jon in his far northern trek to points unknown beyond the Wall.) At least one of the show’s directors has suggested this relative absence is because of the enormous expense involved in generating realistic GCI images of direwolves, given the already frightening costs of integrating dragon and human imagery in the series.

I would not discount the importance of these financial calculations, but it occurs to me that the increasing absence of direwolves from the series is oddly appropriate, precisely because these beings are such potent reminders of our better selves. These beautiful majestic animals don’t simply represent extraordinary strength and ferocity, but also principles of loyalty and ethical nobility, values in increasingly short supply as the series progresses. Game of Thrones, as has often been noted, is relentless in its exploration of the corrupting influences of our human quest for power and mastery.  Wolf packs are well known for their careful defense of all their members, including the most frail and elderly.

Yet in Game of Thrones’ all-too-human world, the unity of the body politic, and the ethical integrity of those in leadership, is repeatedly fractured as the narrative progresses.  Sadly, there may be no place for the direwolf, and the principles of solidarity and loyalty it represents, on our side of the Wall.  Only once he has lost the Seven Kingdoms and entirely abandoned the realm of politics, can Jon be reunited with the last of the domesticated direwolves and return to the wild, untamed land of his first love.

In the “Cave” of the Museum

As it happens, our Canis dirus display is located just where the Hall of Evolution transitions into the Hall of World Cultures. This is entirely appropriate, given that the dire wolf/direwolf transcends the conventional division between “nature” and “culture.”  Actual dire wolves last existed in the shadowlands of our memory as a species, as the retreat of the glaciers opened up new possibilities for human communities around the planet. Our modern mythic direwolves, disseminated digitally and electronically throughout the world, also allow us to reflect on just what it means to be truly human, suspended as we are between impulses towards collective mutual care and drives towards power and mastery at all costs.

I like to think of the Museum’s labyrinthine ground floor halls, which wind their way through the building’s foundations, as a rather mysterious cave, to which we repeatedly return in our quests for knowledge of all sorts. In tracing half a billion years of life on earth, our Hall of Evolution, housing many of the oldest displays in the Museum, provides invaluable glimpses of the wonder and fragility of the web of life, insights that are directly applicable in the Age of the Anthropocene, amidst unprecedented waves of species extinction.

Returning deep into the cave also brings us face to face with fundamental questions about human society and culture. Paradoxically, in the presence of nature’s beings, we come to reflect upon whom we once were, whom we are, and whom we might become. Beholding the dire wolf skull—and pondering all that this long-extinct creature has inspired in our present, interconnected world—reminds of why museums, as repositories of our accumulated wisdom as a species, remain more vital than ever, as we seek to navigate the new worlds ahead.

Your ticket for the: Game of Wolves: The Dire Wolf between Nature and Culture

Game of Wolves: The Dire Wolf between Nature and Culture