The MSU Museum, the science and culture museum of Michigan State University, announces the appointment of Dr. Julian C. 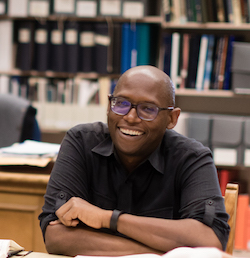 Chambliss as the Val Berryman Curator of History.

Val Berryman, the museum’s late Curator of History, worked at the MSU Museum for half a century. His estate established the Berryman Bequest, which has been further supported by his friends and associates in his memory. Dr. Chambliss is the first person to hold this distinguished endowed curatorship.

MSU Museum Director Mark Auslander remarks, “During his many decades at the Museum, Val Berryman was renowned for his boundless curiosity and enthusiasm in collecting all manner of historical objects. We are delighted that a distinguished scholar of Dr. Chambliss’ caliber will be carrying on Val Berryman’s legacy, while taking the Museum in exciting new directions, including exploring the speculative tradition in African American intellectual and cultural history.”

Dr. Chambliss is Professor of English with a joint appointment in the History Department at Michigan State University. He also is core faculty in the Consortium for Critical Diversity in Digital Age Research (CEDAR). His research and teaching interests focus on race, community, and identity in real and imagined urban landscapes in the United States. He is widely known for his scholarship on Afrofuturism, the Black Imaginary, and black superheroes, especially within the Marvel Cinematic Universe. A leading figure in the critical digital humanities, he has organized museum exhibitions and digital spaces that explore community, belonging, and power in the American South.

Cara Cilano, Chair of the Department of English remarks, “In the short time Dr. Chambliss has been in MSU’s Department of English, he has brought an inspirational energy to our undergraduate courses, our grad program, and our collaborative programming. Dr. Chambliss is actively transforming the work we do in the most positive ways, a dynamic he’ll no doubt carry with him in his curatorial work at the MSU Museum.”

Dr. Chambliss is co-editor and contributor for Ages of Heroes Eras of Men: Superheroes and the American Experience, a collection examining the relationship between superheroes and American culture (2013); co-editor of Assembling the Marvel Cinematic Universe: Essays on the Social, Cultural and Geopolitical Domain (2018); and co-editor of Cities Imagined: The African Diaspora in Media and History (2018). A prolific public intellectual, he has published opinion and commentary in forums such as the Frieze Magazine, Boston Review, Black Perspective: The Blog of the African American Intellectual History Society, Los Angeles Times, The Orlando Sentinel, The Christian Science Monitor, and National Public Radio (NPR). In addition he is co-producer and host of Every Tongue Got to Confess, a podcast exploring communities of color through the lens of the Zora Neale Hurston Festival of the Arts and Humanities.

Christopher Long, Dean of the College of Arts & Letters, shares in the enthusiasm for this joint appointment, “This is precisely the collaboration we hoped would be possible when we established the Critical Diversity in a Digital Age initiative that recruited a thought leader like Professor Chambliss to Michigan State University. We are thrilled to partner with the MSU Museum to support the imaginative curatorial practice and publicly engaged scholarship that animate Professor Chambliss’s work.”

From September 23-27, Dr. Chambliss is hosting the African American arts collective “Black Kirby,” composed of scholar-artists John Jennings and Stacey Robinson. On Friday, September 27 at 12 noon the MSU Museum will celebrate the acquisition of four art works by Black Kirby in a special “Afrofuturist” Homecoming reception.

Julian Chambliss reflects on the new appointment, “I’m grateful for the opportunity represented by the Val Berryman Endowed Curatorship. My goal is to build connections between the MSU Museum, my colleagues across campus, and the wider world. My hope is to use this position to foster interdisciplinary partnerships that enhance the great work already happening on campus.”

On February 15, 2020, the 80th anniversary of Val Berryman’s birth, Dr. Chambliss will deliver the inaugural Val Berryman Lecture in History at the MSU Museum.

Your ticket for the: Julian Chambliss Joins the MSU Museum as Val Berryman Curator of History