Masks for the Holidays: Mystery and the Regeneration of Life

In his December 2018 letter, MSU Museum Director Mark Auslander reflects on the Museum’s collections as he considers the curious symbolism of masks used during the holiday season, from Halloween masks, to the masked figure of Santa Claus, to New Year’s masquerades. Speculatively, Auslander proposes an anthropological interpretation of the meaning of these masks, in light of many other masks in the museum’s collections from around the world.

The holiday season is a time of masks. We begin with Halloween, when millions of children don terrifying or hilarious masks as they flood the streets demanding “treats.” We move into the Christmas period, centered on the masked figure of Santa Claus or Father Christmas, the bringer of gifts to those same children. We conclude with New Year’s Eve festivities, marked by masquerade parties of a decidedly adult tenor. As an anthropologist who studies complex rituals of masking in African societies, I find myself wondering: might there in fact be an underlying “ritual logic” to modern American holiday masking traditions, which guides our actions without our conscious awareness? 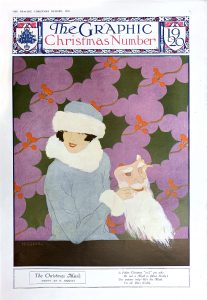 My points of departure are six magazine covers within the Museum’s extensive Christmas collection, assembled lovingly over the years by our late History Curator, Val Berryman. All explore, in one way or another, the relationship between truth and illusion through the image of Santa Claus’ mask or costume:

• The 1920 Christmas Number for “The Graphic,” featuring a drawing by R. Higgins of an elegantly dressed woman holding a Santa mask, accompanied by a poem:

Is Father Christmas “real,” you ask,
Or just a Myth to follow blindly?
One answers truly – He’s the Mask
For all that’s Kindly.

• The cover of “Harper’s Weekly” for December 14, 1901 shows a married couple in their bedroom, in front of their bed. The husband, with a pillow tied around his waist, is about to put on an elaborate Santa Claus mask, as his wife, helps him don Santa’s fur trimmed coat. The caption: “Making up for the Part.”

• The cover of “Puck” magazine for December 24, 1913 is an illustration by L. M. Glackens depicting an older boy scandalizing his younger siblings by opening a large closet containing a full Santa Claus 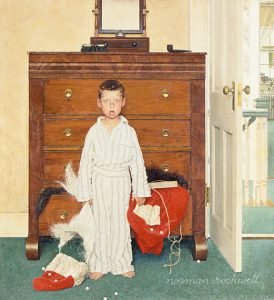 costume with the caption, “Now, will you believe me?”

• Similarly, the December 15, 1951 cover of the “Saturday Evening Post” shows a little boy surprised to discover a Santa costume in an attic trunk.

• The same motif is echoed in the December 29, 1956 cover issue of the “Saturday Night Evening Post,” entitled, “The Discovery,” by Norman Rockwell.  A little boy discovers to his shock a Santa Claus costume hidden in his father’s wardrobe. 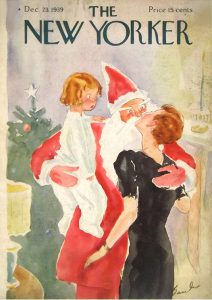 energetically kissing Santa Claus—whom the audience, although not the child, recognizes as the girl’s costumed father.

Why is the mask “true” even if we doubt the existence of Santa Claus himself? Why do we take pleasure in seeing children’s shocked discovery that there is actually a human being behind the mask? And why these enigmatic associations of adult sexuality (the bedroom scene and a passionate parental embrace) with Santa, a figure whom we usually associate with childish innocence?

I am reminded of many African societies in which Coming of Age revolves around the revelation that the masked being, supposedly a supernatural entity, is an assemblage worn secretly by a human being. Among the Chewa peoples of central Africa, a boy being initiated into the Nyau secret society, marked by elaborate Nyau masks, takes his first step towards adulthood when he is, in the bush, ceremonially told by his elders the first great secret, “Nyau ni Muntu” (the mask is a person). The youth is sternly instructed he must forever protect the secret of the mask from all women and younger children. (To be sure, adult women are fully aware that menfolk inhabit the masks, but in principle they should never disclose to men that they possess this esoteric knowledge; women too, play their part in this system, helping guard men’s illusions that their illusions are safe.)

In some African societies, women themselves wear masks; the MSU Museum has many fine instances of Sowei helmet masks, worn by Mende women in Sierra Leone after they have been initiated into the mysteries of the Sande secret society. For all the great variations among mask-based African societies, a basic theme appears again and again: to be initiated into the mystery of the masks, and in turn learning to be a keeper of Mystery, is a crucial step towards becoming a fully socialized person, even though that process of maturation is often painful and wrenching. The challenging passage to adulthood revolves around a process of concealment and revelation. Each masquerade performer lends her or his body to the mask, to serve as its vessel, perpetuating an illusion that becomes true in front of our very eyes. In performance, the great energies of the universe, from the ancestors and other supernatural beings, activate the mask and pass into the human world to revitalize our domain of existence. The mask is a manifest, human-carved illusion that reveals an eternal truth: through our artistry and artifice human beings can triumph over death and help rejuvenate the world, across the endless passage of generations.

Might there be more than a trace of this ancient wisdom in our modern American holiday sequence, from Halloween through Christmas to New Year’s? The great French anthropologist Claude Levi-Strauss once proposed that the figure of Father Christmas carries echoes of the pagan quasi-shamanic figure of the King of Saturnalia, who embodied the seasonal cycles of death and the regeneration of life. As the days darken, humanity yearns for the return of the sun and the life giving warmth of spring. Masks help us along the way. During Halloween, children become stand-ins for the Dead, by donning terrible masks inspired by nightmares of the underworld. Two months after Halloween, during Christmas, adults stave off the power of Death for another year, by giving extravagant gifts to children, who are still, in part, symbolic representatives of the Dead. This little act of magic depends on the masked figure of Santa Claus, lovingly tricking our children into believing the illusion of this immortal, flying being, a belief that even hardened, cynical adults long to share in. “Is it not that, deep within us,” asks Levi-Strauss of the holidays, “there is a small desire to believe in boundless generosity, kindness without ulterior motives, a brief interlude during which all fear, envy and bitterness are suspended? No doubt we cannot fully share the illusion, but sharing with others at least gives us a chance to warm our hearts by the flame that burns in young souls.”

Seen in this light, the changing masks of the two-month holiday period begin to make sense. They seem to be a condensed story of growing up, of moving from childhood to adulthood. During Halloween, we allow our children a dress rehearsal of adulthood: for one night, while wearing spectacular masks, kids are allowed to do all the things normally forbidden to the young: venturing into strangers’ homes, indulging in intense physical pleasure by over-eating sweets, and becoming filled with strange, unruly energies. Children even come close, through their costumes and trick-or-treating, to the Domain of the Dead, which we normally seek to protect our children from. During Christmas (or equivalent celebrations such as Hanukah or Kwanzaa) we recover our children from the specter of Death through boundless generosity associated with signs of eternal life. This includes the Christmas tree or burning candles, and most especially the bearded illusionary mask of Santa Claus, who is elderly but who lives forever (significantly, at the North Pole, a place that is shrouded in winter darkness but which is the source of life-giving abundant gifts.)

However as the six magazine covers suggest, the illusion of the Santa mask cannot be too perfect. Children, sadly, cannot remain children forever. The mask needs to crumble a little bit, and children, in order to grow up, need at times to glimpse beyond it. As in the surprisingly racy New Yorker cover, they even need to gaze upon, if only distantly, the ultimate shock of their parents’ passion for one another, so that they too, someday can transform into fully adult, sexual beings.

Then, on New Year’s Eve, the torch is passed to the grown-ups, who (after the children have supposedly gone to bed) gather to celebrate the death of the old year and the birth of the new. We do this with a dash of Eros with flirtatious glances, happily lubricated by adult beverages. Our masks now are more minimal, concealing just enough to be alluring and tantalizing, emphasizing our beckoning and curious eyes. Momentarily saddened by the loss of the old (singing “Auld Lang Syne”), we summon up the sensual energies of grown-up libidinal attraction, through the New Year’s masquerade, as we bravely venture, as all adults must, into the unknown year ahead.

As it happens, this holiday season the museum celebrates a special gift of our own, a generous donation of African masks. Dr. Teck Yew (MSU PhD 1977) Pee and Mrs. Daisy Britanico Pee have presented the Museum with a special collection of West African masks for our teaching collection. Unusually, Dr. and Mrs. Pee have stipulated that the masks may be touched and even played with by children, in order to encourage hands-on, tactile learning. 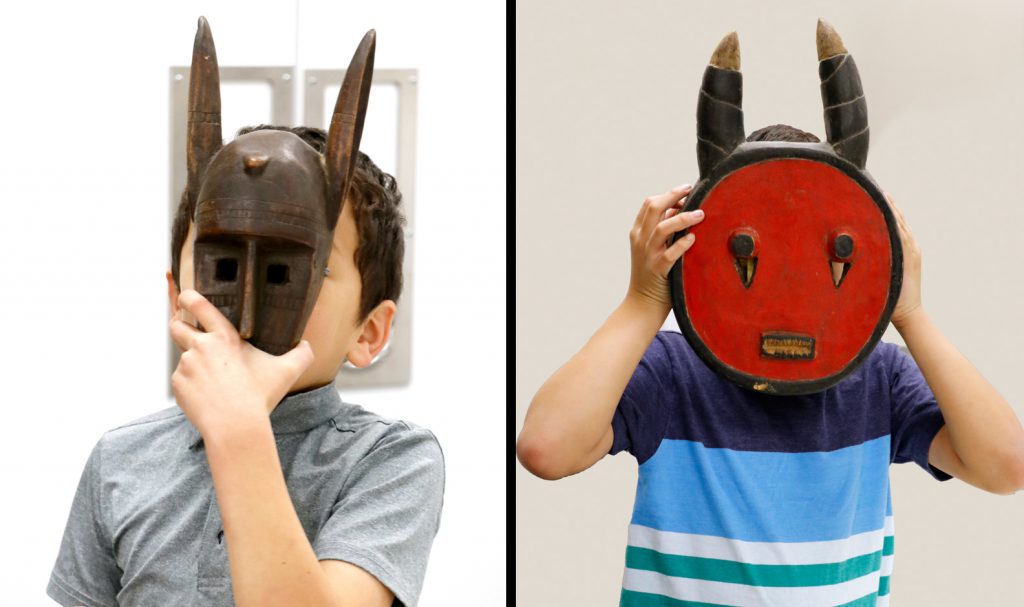 As we honor these masks as cultural ambassadors from the Songye, Senufo, Bambara, and other peoples, they help remind us that for all our important cultural differences, there is so much that humanity shares. All these masks are founded on vital paradoxes: they depend on illusion, yet it is through these illusions that greater truths—about life, death and the regeneration of life—are conveyed across the generations. It is our hope that as the Pees’ masks enter into our Museum collections and are joined together with our American holiday collection, these diverse works of imagination will help our younger visitors in time uncover a profound, eternal truth: growing up depends, simultaneously, on joyfully embracing the arts of illusion, while bravely glimpsing, beyond the mask, the distant lands that await us all.

Your ticket for the: Masks for the Holidays: Mystery and the Regeneration of Life

Masks for the Holidays: Mystery and the Regeneration of Life