“My Youth Still Lives With You”: Images and their Paradoxes at the Museum

MSU Museum Director Mark Auslander reports on the Museum’s new exhibition on studio photography from the West African country of Mali, and reflects on the enigmatic power of images, which can represent a thing at a distance while also seeming to be that thing itself. 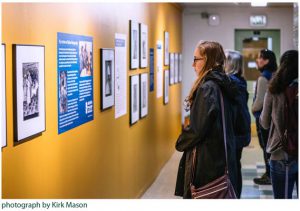 Last Wednesday, the Museum opened a striking new exhibition, “STUDIO/ ATELIER/ FOTOTALAYƆRƆLA: Five Photographers from Mali,” an exploration of photography in Mali spanning the 1940s through the 1990s.  (The word “FOTOTALAYƆRƆLA” means, “Studio” in Bamanakan, the national language of the West African country of Mali.) The show features twenty-five beautiful photographs, mainly individual and group portraits, giving us fascinating glimpses across five decades of the nation’s history. The exhibit emerges out of the Archives of Malian Photography, an international partnership directed by MSU Art History professor Candace Keller, which is preserving and digitizing tens of thousands of negatives created over the years by Malian studio photographers.

At our opening panel discussion, Yousouff Sakaly, son of famed Malian photographer Abdourahmane Sakaly, told us a fascinating story.  Everywhere he goes in Mali, the moment people realize he is his father’s son, they tell him, “My memories live with you in your house. My youth lives with you.” They sense, in other words, that a part of themselves, from a special moment in their lives, continues to reside within the photographic negative that is still stored in the Sakaly household. As Candace Keller explained, this sentiment is closely related to the Bamanan traditional concept of “ja”, the idea that each of us has a spirit double that stands between our inner soul and the outer world. A person’s “ja” can be present in a shadow, a reflection on the surface of water, or even a photograph.

The Power of Images

Although the concept of the “ja” is unique to Bamana culture, it evokes a sensibility that is found, in one way or another, throughout thousands of human cultures around the world.  Human made images are manifestly artificial, the work of human labor, representing something that is in most cases no longer present or only exists at a distance. Nonetheless, we often come to feel that an image is more than just a representation, that it contains the active essence of the thing itself. This notion may have been sensed, tens of thousands of years ago in the caves of southern Europe, as Upper Paleolithic artists covered cave walls with arresting images of animals, in a mesmerizing manner that may have channeled directly the power of normally invisible spiritual forces into the human world. The concept was evidently at play in March 2001 when the Taliban dynamited the famous Buddhas of Bamiyan in Afghanistan, believing that the Buddhas were living divinities that needed to be destroyed. Another version of this sensibility, that an image is more than “a mere image,” is seen when a person risks her or his life to rescue a photograph of a loved one from a burning house. As the great art historian David Freedberg reminds us in his masterpiece, The Power of Images, images evoke passions and unruly responses that exceed our conscious, rational attempts to control or articulate. Images, paradoxically, hover between absence and presence, giving us a glimpse of what is no longer here, while evoking within us the uncanny experience that the imaged person or thing is still right here, with us.

In the Presence of the Wild

Here at the MSU Museum, we spend a good deal of time thinking about the paradoxical power of images. Rationally, we know that our displayed taxidermy specimens are made of preserved animal skin, supplemented by pieces of glass, stretched across an interior framework to give the illusion of a living animal. Yet, gazing at these artfully mounted specimens, it is impossible not to feel the living, breathing presence of the actual animal— the mighty strength of the bear rearing up on its hind legs, the fearsome energy of a rattlesnake coiled to strike, the graceful speed of a cheetah in full sprint across the savannah.

Each time I go into Habitat Hall on the Museum’s second floor and gaze into the seven beautiful dioramas of the different biomes of North America, I find myself pondering the enigmatic power of images.  In a conscious sense, these elaborate illusionary landscapes, centered on caribou, moose, elk or deer, were carefully designed to help educate visitors about the complex fragile ecosystems of the continent.  Yet, there is always a part of me that feels a sheer sense of awe entering this great hall (over which our grand dinosaur casts hover triumphantly). I am reminded of the magnificent cave chambers of the Upper Paleolithic, in which our ancestors created lifelike images of animals.  We cannot precisely know the motivations of people who lived in the Upper Paleolithic, but like us they appear to have been deeply inspired by the energy and glory of non-human living beings; like us, their lives were immeasurably enriched by being in the presence of images that were so much more than “mere” representations of distant things. 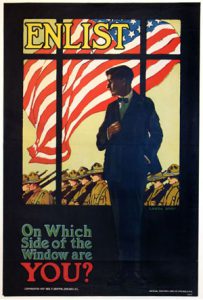 As we prepare to open our exhibition,“War and Speech; Propaganda, Patriotism, and Dissent during the Great War,” we find ourselves pondering other aspects of the power of images. The show is anchored in our collection of posters created during World War One to inspire popular support for the war effort, through recruitment, war bond purchases, and frugality on the home front. These posters are sometimes reckoned the birth of the modern American advertising industry, and still have remarkable powers to enthrall, inspire or disturb us.

While the full show will open on November 11 (the 99th anniversary of the war’s end on Armistice Day) our exhibition team has developed a compelling “preview” on the wall of the museum foyer.  This segment, titled, “Learning to Look,” presents a blown up reproduction of one of the war’s most compelling posters. Created by artist Laura Brey, this 1917 image shows a young man in civilian clothing, in shadow, gazing pensively through a large window, at marching uniformed soldiers outside, bathed in sunlight under a large American flag. The caption reads, “On which side of the window are you?”

(We suspect that Brey may have been mindful of the indecisive narrator in T.S. Elliot’s 1915 poem, “The Love Song of J. Alfred Prufrock,” torn between contemplation and action: “And indeed there will be time/To wonder, “Do I dare?” and, “Do I dare?”)

On the adjacent wall, we’ve posed a series of question about the poster, under “lift up” flaps, for our young visitors to ponder as they gaze silently at the image. Why is part of the picture in darkness and part in light? Why is the young man in civilian dress? Why is he shown looking through a window?  We hope our visitors, having taken the time to come up with their own answers to these questions, will enter the full exhibition with the conceptual tools to “unpack” the other posters they will discover on the gallery walls.

Why indeed did Laura Brey choose to separate the young civilian from the soldiers and from the flag through a large window?  I suspect this graphic strategy has something to do with the way that a scene seen through a glass window is, like all the images we have been discussing, both somehow separated from us yet also tantalizingly close to being grasped. Looking at the poster, we initially identify with the young man in the shadows, who is on “our” side of the window, inside looking out. We are enthralled by the grand flag waving in the breeze and the handsome young soldiers marching in the light. We feel the visceral excitement of the parade, but we are aware that we are not quite in it yet.  The artist has masterfully created a picture within a picture, and invites us to travel, like Alice on the verge of Wonderland, through the Looking Glass. We can do more, she seems to say, than simply witness history, we can make History, by crossing through the window from the shadow into the light.

“Windows” on Science and Culture

All of these images — African studio photographs, life-like taxidermy specimens, and wartime posters—remind us that the Museum itself lives in the curious paradoxical space shared by images themselves.  We are a place both of absence and presence, of distance and nearness. We constantly show things that evoke what is no longer here (through fossils, old clothing, or a general store from a bygone era), but we do so in such a way that invites our visitors to imaginatively step across the window of the display case. I like to think that whenever that happens, the “ja” or shadow self of each visitor, as our friends from Mali might put it, is activated, and begins to go traveling. At the moment we move through the glass window, our spirit double in effect becomes the paleontologist, the ornithologist, the archaeologist, the historian, or the folklorist—and joins us all in a never-ending journey of exploration and discovery.

—-
Dr. Auslander would like to know what images in the Museum most inspire you or members of your family. What makes you long to travel “across the window” and discover something new?

Your ticket for the: “My Youth Still Lives With You”: Images and their Paradoxes at the Museum

“My Youth Still Lives With You”: Images and their Paradoxes at the Museum