New Feature: Letter from the Director

Between “Resonance” and “Wonder”: The Museum’s Brown Bear 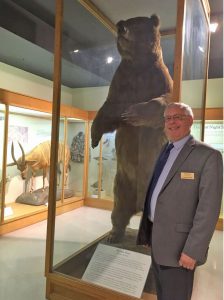 The large, standing Brown Bear is one of the most iconic and beloved objects in the MSU Museum’s vast collections. Where did it come from, how did it end up on the second floor, and what does it communicate about natural history and about human cultures?  Dr. Mark Auslander, the MSU Museum’s newly arrived director, reflects on this fascinating and evocative object.

In one of the most famous essays ever written about museums, literary and cultural historian Stephen Greenblatt distinguishes between the “resonance” and “wonder” of museum objects.  “Resonant” objects serve to connect diverse important facts and help teach the viewer through intellectual functions. “Wondrous” objects, in contrast, operate primarily through inspiring jaw-dropping awe, eliciting an emotional punch to the solar plexus that goes far beyond merely cognitive or academic reflection. (Greenblatt may be inspired by Roland Barthes’ contrast,  in his masterpiece Camera Lucida, between the ‘studium” and “punctum” of a great photograph: the “studium” refers to the formal meaning of an image, which can be decoded logically and dispassionately, whereas the “punctum” is the aspect of a photograph that pierces us, sometimes to our very soul, in ways that often escape our conscious capacity to articulate.)

Of all the objects on display in MSU’s Museum, perhaps none so remarkably combines “resonance” and “wonder” as the great Brown Bear, towering over all the other taxidermy specimens in the second floor’s hall of Evolution and Adaptation.  At ten and a half feet, it ranks among the largest Brown Bear specimens on display in any museum.  During my first visit to the Museum, back in February, as I rounded a line of cases, I actually jumped with shock as I unexpectedly saw the bear, rearing up on its hind legs, its claws extended outwards. It is a magnificent specimen, wonder-inducing in the most fundamental sense. Yet, it is also “resonant,” carefully placed in relationship to other mammal specimens to illustrate important points about natural selection and adaptation across the diverse, global web of life. 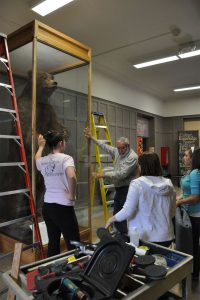 During my first week on the job as MSU Museum Director, I’ve come to learn a bit about this striking specimen from colleagues and visitors. It was shot by big game hunter Jens Touborg along the Aniakchak Bay on the Alaskan peninsula in 1958, and donated to the museum by Mr. Touborg in 1983. (He also donated other taxidermy mammal specimens, as well as the African Bush Elephant skeleton, now displayed along the second floor stairwell.)

For many years, the bear was installed in the first floor foyer near the Museum’s north entrance, where countless visiting families would have their photographs taken in front of it; at that point, I understand, it was not fully enclosed in a case and many children would reach up to touch its massive claws. Later it was covered entirely in a glass case and moved to the center of the foyer’s west wall, where it continued to greet thousands of museum visitors. In 2009, the Museum decided to move the bear up to the second floor, to place it in the more appropriate intellectual context of the hall of animal diversity.  There’s a delightful video  (narrated by my predecessor Gary Morgan) of the heavy specimen being carefully and laboriously moved up two flights of stairs by MSU Moving Services to its new home, at:   https://www.youtube.com/watch?v=JsAOcHU6188

Humans and “The Bear”: A Shared History

In its current location, “The Bear,” as it is affectionately known, effectively illustrates the museum’s tagline, “where science and culture meet.”  In terms of natural history, the specimen helps teach us about the remarkably adaptable species Ursus arctos, which for hundreds of millennia roamed across much of North America, Europe and Asia. Inland Brown Bears in North America are known as grizzly bears; the coastal Alaskan peninsula, from which this specimen was collected, is home to some of the world’s largest brown bears. For paleo-anthropologists, zoo-archaeologists, and other scholars of human prehistory, this striking creature helps us understand the enormous challenges our early ancestors faced in colonizing the earth. On the African savannah the big cats were the greatest threat to successive hominid species;  after multiple migrations out of Africa, bears were probably the greatest danger, day in and day out faced by Homo Erectus, Neanderthal and Cro Magnon.  Combating bears and displacing them from caves and other habitats took a high degree of cooperation, sophisticated intra-group communication, and innovative technologies, including fire, projectile points, spear throwers and bow and arrow. For hunter and gatherer bands, moving across dramatically different climates and environments, harvested skin, bone, claws, fat and muscle from hunted bears were vital sources of food, tools, garments, and regalia.

In turn, across millennia, encounters with Ursus arctos helped to shape hundreds of human cultures and artistic traditions across the northern hemisphere. The oldest known statues, at least 20,000 years old, appear to have been representations of bears. These creatures’ high intelligence, speed, strength, complex social structure, and resilience led many traditional human societies to understand them as ambassadors of sacred realms, often in close spiritual kinship with human beings. The death of a great bear was often understood in sacrificial terms, embodying the ancient mystery of the sacred transformation of death into life, through which individual persons were reborn into social collectives.  Bear imagery is often deployed in the sacred rites of small scale, pre-capitalist cultures to accomplish the greatest task of archaic society: the remaking of the unsocialized young into mature social persons.

In ancient chiefdoms and states the bear was often understood as a sacred sign of kingship and sovereignty, standing as a life-giving intermediary between the invisible realm of the gods and visible domain of mortals. (The fascinating story of how the medieval Church gradually displaced the sacred symbol of the bear in favor of the lion as a sign of Christ’s nobility, while promoting extensive massacres of wild bear populations,  is detailed in Michel Pastoureau book, The Bear: History of a Fallen King.)

Speculatively, our powerful emotional response to the great MSU bear may emerge out of this ancient cultural history, which stretches back to the upper paleolithic, long before the rise of agriculture: we too may recognize this awe-inspiring standing figure as a momentous “Fallen King,” who evokes in each of us the age-old mystery of loss and miraculous rebirth.  Perhaps it is for this reason that so many parents, who recall first seeing the bear as children, love showing it to their own young children: it reminds us that although mourning and loss come to us all, something profound and deeply meaningful endures across the generations. Might it be that this capacity for awe, our ability to experience deep wonder in the face of mystery, is the greatest gift we can present our children and our posterity?

For all these deep continuities across the epochs, “The Bear” is also a powerful reminder of how museums, including this one, have altered over the past sixty years. The MSU Museum was intertwined long ago with the “Polar Explorer Club,” through which big game hunters shot significant mammals around the world and donated their taxidermy specimens to the Museum for our collections. Our ethical understanding of museum collecting and environmental stewardship has changed dramatically across the decades (although we acknowledge that big game hunters, paradoxically, played important roles in establishing vital wildlife reserves and national parks in North America and Africa.)  Today, many museum visitors raise concerns about the appropriateness of displaying taxidermy-mounted specimens, especially of endangered and charismatic megafauna. These displays, they caution, might promote unsustainable environmental practices or reproduce older colonial assumptions about the rights of people of European descent to dominate peoples and ecosystems around our fragile planet. We are increasingly mindful of the importance of engaging local Native American/First Nation  communities, here in Michigan and on the Alaskan peninsula, in discussions about how best to honor this great, fallen creature, who is understand a sacred being in many indigenous cultures. Members of the Bear Clan, in particular, may have important guidance for us as we reflect on how to move forward in future displays.

These are challenging and difficult questions, which we encourage our visitors, young and old, to ponder and converse about.  In the 21st century, the job of museums is not to tell people what to think but to give us all tools to debate one another with rationality and civility—-and to reach, in time, our own independent conclusions about the universe and our proper place within it.  An important museum object, such as the Museum’s Bear, does not have a singular meaning. It does not communicate a clear, simple message. Rather, it evokes a host of unresolved questions, emerging out of thousands of years of environmental and cultural history.  Great museum objects, especially those that trigger both resonance and wonder, make us think, and feel, in unexpected ways, and help us in the great work of becoming more than we thought we were.  And that is why, in an era in which our society is so bitterly polarized over difficult questions in science and culture, we need museums more than ever.

Dr. Auslander would love to hear from friends of the museum about your memories of the bear and other artifacts and specimens on display in the MSU Museum over the years. Please share your stories and memories with us. 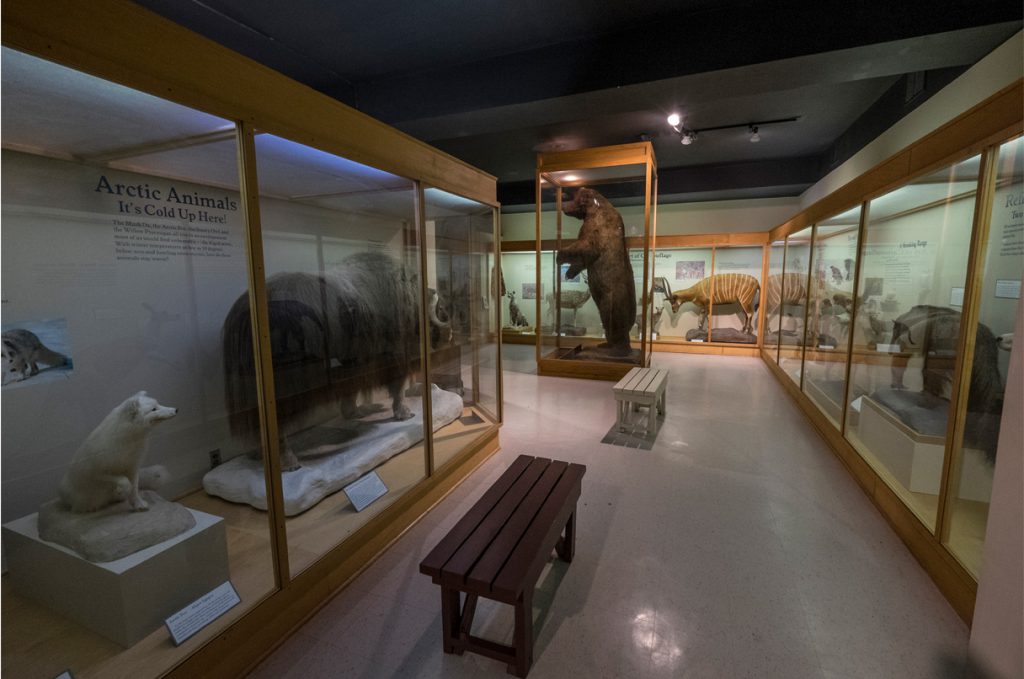 The following memory is from Emily Fijol of her daughter and the bear.

“That bear holds a place in my heart because the MSU Museum was Sophia’s first “school” field trip location when she was maybe 3. They did a program on “feathers or fur” and the docent asked the kids, “what does a bear say?” Sophia leaped up at the front of the whole group and roared her little heart out with claw hands and all. She was so excited.”

The following memory and photograph are from Matthew Wilcox of his son and the bear.

My son, Benjamin, is inheriting my appreciation of history.  The fact that he was born with Down syndrome has done nothing to slow him down or stifle his curiosity.  Our trips to the MSU Museum are always fun.  Benjamin tends to breeze past many of the exhibits, but he always stops at the bear.  And he always wants his picture taken with the bear. 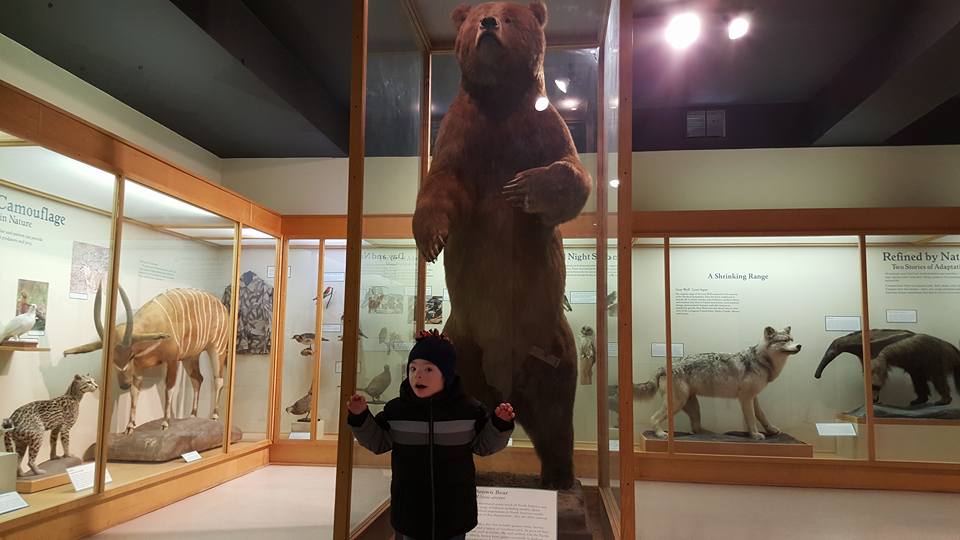 Your ticket for the: New Feature: Letter from the Director

New Feature: Letter from the Director