Singing the Future: Between Absence and Presence

In his August 2019 letter, MSU Museum Director Mark Auslander reflects on how works of art may simultaneously dramatize a void of great loss while also serving as staging grounds for re-imagining productive futures. His examples are drawn from the Museum’s current exhibitions of Chilean arpilleras, highlighting the tumultuous era of the military dictatorship, and a new song by sister survivor Amanda Cormier, chronicling her return to artistic creativity.

How do we envision what has been lost to us? How, in turn, do we see beyond the aching gulf of absence, to engage actively in the work of making a productive future for ourselves and our posterity? These questions are explored in two very different genres, through installations currently on display in the MSU Museum. The exhibition, “Between Absence and Presence: The Arpilleras Movement in Chile,” presents vibrant patchwork fabric works created by Chilean women, honoring the thousands of persons “disappeared,” abducted, tortured and murdered by the military dictatorship from 1973 to 1990. In turn, in the main floor gallery’s exhibition, “Finding our Voice: Sister Survivors Speak,” we present a song by sister survivor Amanda Cormier, evoking her own painful journey towards hope, transformation, and restored creativity.

“Between Absence and Presence” was developed in parallel with the Broad Art Museum’s current exhibition, “The Edge of Things: Dissident Art Under Repressive Regimes,” organized by the Broad’s former associate curator Carla Acevedo Yates (now at the Museum of Contemporary Art Chicago). Carla’s show engages with contemporary art created under the military dictatorship periods in Chile, Argentina, and Brazil. The Broad exhibition showcases work by professional artists, many operating within the framework of conceptual art. In contrast, the arpilleras on display in the MSU Museum were created in most instances by working class women without formal art training. Most had been left emotionally and financially bereft by the abductions and assassinations of their husbands and children at the hands of the Junta’s security forces. These appliqués were usually produced on the backing of burlap, recycled from flour bags, onto which were sewn scraps of fabric, sometimes cut from the clothing of disappeared loved ones. These haunting images repeatedly ask “Where are They,” summoning up the apparitions of those who had been wrenched away. Many arpilleras were smuggled out of the county, used to raise awareness of the plight of impacted families and to provide a modest degree of financial support for the impoverished women who had created them. Over the years, many of the most important arpilleras have been collected, documented, and interpreted by the noted Chilean poet, scholar, and activist Marjorie Agosin, who has generously lent these works to the MSU Museum for this exhibition.

One poignant cloth panel chronicles how the mothers of the Disappeared came to meet one another. We see women searching through city streets for children who had not come home, visiting hospitals, law courts, and morgues. They recall that they saw in the eyes of the other mothers an agony that mirrored their own, and realized they were all on a similar, almost always futile quest for answers: Where is my child? What will become of him? 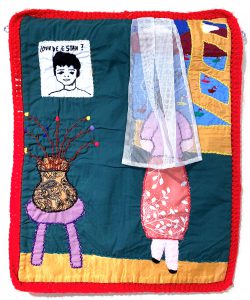 Arpillera depicting a woman looking out a window behind a curtain at the ocean.

In many instances, the mothers gathered surreptitiously in Catholic churches to sew their arpilleras, giving visible form to the painful, palpable absence of the Lost. In one image, we see a family seated at dinner, arrayed around an empty table setting, a vacant chair making visible the otherwise invisible child, In another panel, a woman, glimpsed behind a curtain, gazes out wistfully at the ocean, in a possible allusion to the regime’s practice of disposing of the bodies of its murdered victims by dropping them from helicopters into the sea.

An especially impressive work was sewn primarily by Violeta Morales, a well-known “arpillerista,” commemorating the loss of her brother, the labor activist Newton Morales. She chronicles the nation’s modern political history in a timeline arrayed across a panoramic rendition of the Andean mountains. Although we never see an image of Newton himself, the mountains themselves, which in ancient Andean cosmology are avatars of the gods and the ancestors, seem to stand as sacred witnesses, making present the martyred Dead who have been torn away from the community of the Living. This large panel, completed by Violeta’s daughter- in-law after her death, renders tangible a story of family continuity and an enduring commitment to remembrance and justice, against all odds.

Some of the images are unbearably painful. Shadowy secret police officers kidnap innocent people on a city street. Children, left abandoned by the disappearances, gaze hungrily at passersby who willfully ignore them. We see the national stadium, once a site of national pride and joy, turned into a site of summary execution outside of the sanction of law. We see hidden locations of interrogation, in which victims are tortured on an electric grill. We behold mothers discovering a location where the bodies of the disappeared were buried in quicklime, as the regime sought to hide its crimes from the world. More nuanced images depict a group of women dancing the national dance, without their menfolk, whom, we are given to understand, have been abducted.

Later arpilleras bear traces of hope, as democracy returned to the nation in the late 1980s. Kites fill the newly liberated sky, each bearing a wish for restored economic and political freedoms. I am particularly entranced by a panel showing a crowd of people pulling back a wall (reminiscent of the downfall of the Berlin Wall during this same period) transforming a bleak monochromatic field into a brilliantly colored landscape, bursting with new life. We are reminded that at times the most potent prisons are those created within our minds: it takes a collective act of imagination to envision anew the possibilities of a vibrant future. In turn, all of us at the Museum are deeply taken with an arpillera depicting the remarkable Museo de la Memoria (Museum of Memory) in Santiago, which unflinchingly documents the national nightmare of the dictatorship and chronicles the long struggle for justice and freedom. Exhibits depict the bombing of the Presidential Palace in 1973, the horrific torture instrument known as The Grill. And then, on the top floor, we see the arpilleras themselves, immutable testimony to the quest for memory and truth-telling. The work of the artilleristas continues to this day through the group Colectivo Memorarte (“memory” + “art”), as women gather to embroider images highlighting contemporary environmental and economic challenges, binding together the everyday and the sweep of history. 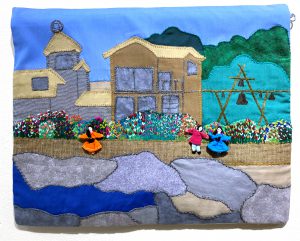 I am deeply moved by the arpilleras that celebrate the power of poetry, a genre so deeply intertwined with the Chilean national soul. A remarkable panel depicts the home on Isla Negra of the great poet Pablo Neruda, whom many believe to have been covertly murdered by the regime soon after the coup, perhaps to prevent him from convening a government in exile. It is reported that as the armed forces were searching this home, Neruda told them, “Look around, there’s only one thing of danger for you here, poetry,” In the arpillera’s beautiful depiction of the poet’s seaside home, his absent presence endures, bearing witness to the power of poetry to outlast a regime built on lies and arbitrary violence, and to serve as a foundation of a new national sense of home.

Upstairs, in a quite different vein, our new installation of Amanda Cormier’s song, “Sometimes,” explores a comparable terrain of absence and presence. In January 2018, on the first day of the victim impact statements during the sentencing phase of the Nassar trial, Amanda explained that although trained as an elite vocalist and singer-songwriter, she had lost the ability to write music. Judge Rosemarie Aquilina urged her from the bench not to give up and expressed the belief that in time she would once more compose music, write lyrics, and perform. 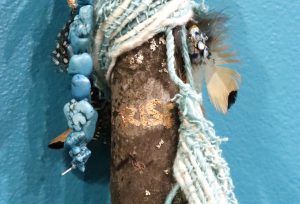 A wooden staff created by Amanda Cormier in an expressive arts workshop for sister survivors sponsored by the MSU Museum in December 2018.

A year later, Amanda, who works in the country music industry in Nashville, Tennessee, participated in an expressive arts workshop sponsored by the MSU Museum, creating one of the beautiful staffs of strength now on display in “Finding our Voice.” Soon afterwards, she committed to writing a song to be premiered at the April 12, 2019 private opening of the exhibition, in front of her sister survivors and their loved ones. (She reports that the song fully came together only during the weekend before the opening.) Recently, she professionally recorded the song with producer Jim Lill for inclusion in the exhibition. 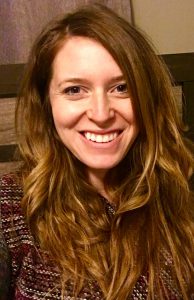 Sometimes I feel nothing at all
Numbness the strength of my walls, sometimes
Sometimes all I can hear is the screams
All part of some big bad dreams, sometimes.

Sometimes I see the beauty in all
Refuse to put up that wall, sometimes
Sometimes I’ll choose to take a stand
Revolutions in demand, sometimes

Sometimes I’ll say it all out loud
Right out in front of the crowd, sometimes
Sometimes I won’t apologize
Even if you see me cry, sometimes

In some time I won’t feel a thing
These thoughts will no longer sting, sometimes.

The opening stanza references pervasive male commentary, which, Amanda notes, she regularly encounters on line and in person, discounting or dismissing the voices of survivors, “from men downplaying our trauma and the entire #metoo movement.” She repeatedly hears such phrases as, “It’s a dangerous time to be a man in America;” “It must not be real if she waited so long to tell someone;” or “Why would you want to ruin a man’s life?” She opens by briefly addressing these men, but then turns to other audiences, including herself.

In the opening frozen state of being, locked into the endless tape loop of traumatic violation, it seems impossible to envision any kind of future: “Numbness the strength of my walls.” Yet, the process of artistic creation, returning to the time of knowing “how it feels to sing,” takes her on the next step of breaching her own walls, moving outwards back into the public realm and finally back along a future-oriented path. This process leads to her moving back and forth in time; the effect, one senses, is to encase the moment of trauma in order to establish a degree of control over that past and over the flow of time.

The word “time” itself, significantly, takes on several different means during the song. The title “Sometimes” initially evokes the primal state of static numbness, then comes to signal a life-restoring moment of speaking and singing out loud. Towards the end, the singer envisions the future moment of “some time,” when she “won’t feel a thing.” Over the course of the song, the singer moves from “sometimes,” being confined to an interior psychic cell, to summoning up a future state of being, of no longer being imprisoned by the weight of the past, “sometimes.”

My former student and collaborator Bryce Peake, an anthropologist, data scientist and jazz musician, recently noted that the lyrics’ emphasis on forward motion is enhanced by the work’s chord progressions, moving again and again towards resolution in the chorus’ hopeful line, “This little girl will break free.” Out of the void left in the wake of trauma and injustice, a new wave emerges, building towards a crest that makes a new future visible and audible. At a time when Country’s Top Forty on radio are dominated by male voices and the most retrograde of gender politics, it is inspiring to hear Amanda reclaiming the terrain of Country as a place of liberation and rebirth. Through Amanda’s haunting and sonorous voice, we are reminded, as through the arpilleras and Pablo Neruda’s fearless poetry, that when art most honestly excavates landscapes of pain, new worlds of hope and restored integrity really do become possible.

Your ticket for the: Singing the Future: Between Absence and Presence

Singing the Future: Between Absence and Presence