This Equals That: Revisiting the Problem of “Equivalence”

In his October 2018 letter MSU Museum Director Mark Auslander reflects on conversations about bringing Michael Heizer’s legendary art work, “This Equals That,” out of long term storage, to be restored and reconstructed somewhere in the Greater Lansing area. Long considered one of the nation’s preeminent monumental sculptures, “This Equals That” raises fascinating questions about the nature of “equivalence,” questions that are of urgent significance for museums, and universities, everywhere. 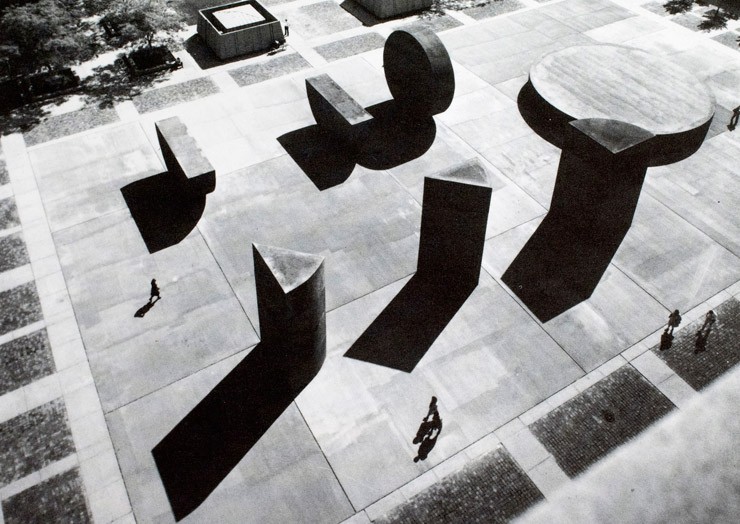 Over the past two years, my colleague Steven L. Bridges, Associate Curator at the Eli and Edythe Broad Art Museum, has been exploring a marvelously audacious idea. Should the University undertake recovering one of the nation’s most important works of monumental public sculptures, Michael Heizer’s “This Equals That” (1976-1980), from a location where it has been abandoned for many years, and install it somewhere in the Greater Lansing region? From 1980 to 2002  this half-acre sculpture, sometimes called “Lansing’s Stonehenge,” was installed on a plaza to the immediate west of the State Capitol Building in Lansing. Then, during a period of great financial challenge for the state, the work was disassembled and moved to Mason, where the internal armatures were left outside in a Department of Transportation lot for years. At some point, the armatures were relocated to an industrial storage area near Detroit, and fell into ever deeper disrepair.

In its heyday, “This Equals That” consisted of seven geometric solids: a large circle (strictly speaking, a short cylinder) resting flat on the ground, a smaller circle resting vertically, two half circles also resting vertically, and three quarter-circle columns, standing upright. The work reflected Heizer’s fascination with a geometric relationship: “This”, the combined area of several various smaller components, equals “That”, the surface area of the largest object.  It is highly appropriate that Heizer anchored this meditation on the nature equal-ness in the shape of the circle: As Plato observed 2,500 years ago, a circle is a figure on a flat plane, “the extremes of which are everywhere equally distant from the center.” There is no more perfect or fundamental illustration of the concept of equivalence than the circle itself, and it may be that for this reason that circles are so deeply valued in sacred sites the world over, from Stonehenge to ancient Native American mounds to the dome of St. Peter’s.  In a sense, all circles are “equal” to one another, regardless of their size, color, texture, composition, or location, inasmuch as they conform to the basic definition of “circle-ness,” describing a perimeter made of points equidistant from a central point.

What is “Equality,” Anyway?

Having said that, the title “This Equals That” raises a host of fascinating philosophical conundrums. After all, in a manifest sense, the seven solid segments, which look so different from one another, clearly are not the same. And yet they are “equal” to one another. My father, the pure mathematician Joe Auslander, remarks that “equivalence” is a highly elusive concept in Mathematics. Equivalence is based on a claim to underlying sameness in respect to certain specified qualities (such as volume, surface area, financial value, or energy) even though in other respects the various “equated” elements are obviously not the same.  Consider one of the most famous equations in the history of thought, Albert Einstein’s special relativity equation E=mc². The underlying assertion that mass and energy in a body at rest are fundamentally equivalent, and may be converted into one another, would seem to fly in the face of everything our senses tell us. And yet this is an equation that in a sense undergirds our entire universe, as exemplified in the process nuclear fusion, as the conversion of hydrogen to helium generates the energy that “makes the stars shine.”

Even the equals sign (=) itself is slippery. The notation was invented in 1557 by the Welsh physician and mathematician Robert Recorde, who used two parallel line segments (=), because, as he put it, “noe 2 thynges, can be moare equalle.” And yet even those segments, while of the same length, are not entirely equal, given that one line is above the other. Hierarchy, ironically, is hardwired into the very form through which we represent equivalence.

Heizer’s mediation on the mysteries of equality was all the more striking given the positioning of his massive work on the grounds of the State Capitol. Representative government is predicated on a complex balance of abstract claims to equality (“All men are created equal’) and the necessarily messy business of the distribution of political power and influence, which means that in practice absolute equality among all citizens will never actually be achieved. And yet, the goal of equality is one that we must never cease striving for. As Dr. Martin Luther King, Jr. famously declared in his 1963 “I have a Dream” speech, we must insist on full payment on the Founders’ “promissory note” of equal justice under law.

The title “This Equals That” would also seem to have enigmatic spiritual dimensions. The overall design of Heizer’s sculpture is often compared to that of the lotus flower. In ancient Egypt and in South Asia the lotus flower is a powerful symbol of rebirth, in part because the lotus plant emerges out of mud, yet is gloriously resplendent and unsullied.  At night, the lotus plant often submerges itself into mud or murky water  yet each morning appears above the surface in all its vibrant perfection. The blossom thus encapsulates a paradox of equivalence and difference: it exists simultaneously in subterranean and elevated states, in darkness and in light, and is thus a powerful analogue for cycles of death and the regeneration of life and for the ascension of the soul—embodying a fundamental equivalence that can transcend the ravages of time itself.

For all these reasons, Steven’s proposal to bring “This Equals That,” back to life from the veritable junkyard is especially moving and intriguing.  Like the ancient symbol of the lotus blossom, which moves from darkness to light, and from loss to regeneration, Heizer’s massive work would now emerge out of the soil of our region, its towering forms captivating new generations of students and visitors. The thought-provoking title, “This Equals That” would take on new meaning: would the restored work of seven large standing figures really be the “equal” of the half-acred sculpture that once stood for more than two decades to the west of the state Capitol building? Necessarily, some of the armature and metal coverings would need to be rebuilt, and the spatial relationships between the work and surrounding buildings would be profoundly different: and yet in some respects it would still be the same work. In what way, we could all debate, does “this”, the new sculpture, equal “that”, the classic work that once stood five miles to the west?

I like to think of “This Equals That” as a lost temple to the fundamental philosophical problems at the heart of the museum system. Museums of all sorts are obsessed with the problem of equivalence: what precisely does it mean to recognize fundamental sameness among elements in a collection, even as we study and illustrate their differences?  The MSU Museum possesses, for example, about ninety hyena skulls collected from the same East African nature reserve. Although the crania of these animals are so similar as to appear virtually identical, they vary significantly in size and brain-case capacity, a function of relations of social hierarchy within the clan, which dictate access to food and other resources. In our current collection project, assembling and caring for hundreds of teal ribbons wrapped around campus trees as tributes to survivors of the horrific sexual abuse scandal, we are all aware that while in a formal sense all the ribbons are the “same” and thus equal to one another, each one has fundamental and irreducibly unique value, exemplifying the precious uniqueness of each individual survivor of the crisis.  In turn, our colleagues at the Broad Art Museum continually assemble, research, and display works that have various equivalences to one another: these are all “Abstract Expressionist works”, or are all “Jasper Johns.” Yet it is that continuous assertion of sameness that makes possible the careful, illuminating work of comparison.

The University, it seems to me, has a particular stake in this project. All the diverse disciplines of scholarship and practice represented at MSU are centrally concerned with paradoxes of equivalence and difference, which go to the necessary project of classification upon which all critical thought depends: what does it mean to speak of “The Restoration drama” or “the quark” or “the chromosome,” given that all examples of these classes, while formally equivalent to one another, are necessarily unique in some respects? “This Equals That,” precisely because it so beautifully illustrates the philosophical conundrums of any such straightforward claim to equivalence, is an inspiring monument for all who seek to contemplate and extend the architecture of knowledge itself. Assuming external funding and necessary permissions can be secured, isn’t it high time that we honor this long-lost temple of “equivalence,” and offer it, after its lengthy period of exile, a fitting and sheltering home?

Read more about “This Equals That” in the Lansing State Journal article by Eric Lacy, “Art experts want to bring back Michael Heizer’s controversial ‘This Equals That’ sculpture.”

Your ticket for the: This Equals That: Revisiting the Problem of “Equivalence”

This Equals That: Revisiting the Problem of “Equivalence”