Turning Points: From Pickett’s Charge to Facing the “Anthropocene”

In his April 2018 letter, MSU Museum Director Mark Auslander reflects on Mark Bradford’s artwork “Pickett’s Charge“, a vast and important work of site-specific art currently on display in the Smithsonian’s Hirshhorn Museum. Bradford reflects on the hidden histories embedded within the epic turning point of the Battle of Gettysburg. What future works of art and museum installations, Auslander asks, might someday evoke the great “turning point” in our current moment of environmental history, a period sometimes termed the “Anthropocene”? 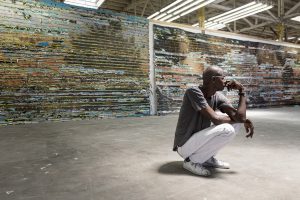 I recently had the opportunity to visit Mark Bradford’s monumental site-specific installation, Pickett’s Charge, now on display in the third-floor interior circular gallery of the Hirshhorn Museum of Art, in Washington DC. The work covers around 400 linear feet, floor to ceiling, spanning the entire circumference of the grand hallway that overlooks the museum’s open air fountain court. It is a colossal riff on Paul Philippoteaux’s Cyclorama at Gettysburg National Military Park, Pennsylvania, a vast painted circular representation of the most famous episode of the 1863 Battle of Gettysburg. Pickett’s Charge, the doomed Confederate infantry charge into Union lines, is recreated in Philippoteaux’s painting in intricate detail, in keeping with late 19th century American ideological emphasis on the heroic nobility of both sides of the conflict.

In a series of eight enormous panels, Bradford has relocated digital prints of cyclorama onto assorted rolls of paper, heavily daubing some segments with paint; he has embedded within this thick mesh of abstract and figurative imagery long stretches of rope in horizontal lines. At places he has yanked out rope segments, to create great sprawling tears and lacerations in the surface, so that at places stretches of painted paper spiral out towards the viewers, almost like bodies falling amidst cannon fire.

The net effect is a visceral retelling and reexamination of one of the most pivotal moments in American history, which ultimately turned the war’s tide towards Union victory and spelled the ultimate demise of slavery. Bradford rejects any easy, romantic representation of the war; every stretch of the work is marked with signifiers of violence, pulling the scabs off of our national historical wounds. As an African American man long engaged in social justice causes, Bradford is acutely conscious of the long-term violence of chattel slavery that underpinned the Civil War; the long cords, lurking beneath the canvas and at times erupting out of it, evoke lacerated scars on a flogged back. The extended horizontal stripes formed by the ropes call to mind a perpetually wounded American flag, or lines of stratigraphy unearthed through Bradford’s relentless excavations of the hidden depths of American history. His work painfully connects the legacies of the Civil War with our own troubled present, in which our nation once again seems intractably polarized, and in which, to his mind, the bodies of persons of color are once again terribly at risk. Bradford is eminently mindful of the mass racial violence that followed the end of Reconstruction, tragically echoed in our modern moment, he would maintain, of Black Lives Matter and mass incarceration, sometimes termed the New Jim Crow.

The eight enormous panels of Pickett’s Charge explore a different moment in the great turning point of battle.  I am especially entranced by the sequence called “High Water Mark,” a reference to the northernmost point of Confederate military penetration of the North, when it appeared that Washington DC itself was fated to fall and the success of secession was imminent. Bradford imagines this moment as an enormous up-swelling of water, a kind of inexorably mounting tsunami wave, pressured upwards on a nearly geological scale, and then suddenly breaking and subsiding.  We are invited to ponder how much turned on a single charge, and on a single battle, and what alternate futures might have awaited the nation had the high-water mark broken in a different way.  The curving walls of the Hirshhorn are perched on the National Mall, our nation’s most sacred space. As our gaze turns from Bradford’s rotating landscape to the Mall itself—arrayed along an east-west axis that, in principle, binds north and south—we find ourselves made viscerally aware of the historical fragility of the national project.

Circumnavigating Bradford’s enormous, sweeping work, I found myself wondering how future artists, and future museum designers, might evoke the current “turning point” we are now living through. Many scientists have termed our era, “The Anthropocene,” a new geological era characterized by massive human-created alteration of climate and the global ecosystem. Since around 1950, new layers of radioactive sediment, from nuclear weapons testing and the byproducts of nuclear weapons production, have been laid down across the planet, adding a new chapter to the earth’s stratigraphy. Rising sea levels, melting polar ice caps, turbulent weather patterns, altered growing seasons, and the sixth great extinction in the history of life all pose unparalleled challenges for humanity and our companion species on planet Earth. There is, many scientists would argue, no more urgent issue for museums to address. We face a global turning point, as we reflect on rising carbon emissions and their potential outcomes The lives of future generations quite literally depend on how well we, and our children, understand the causes of our current planetary predicament and devise ingenious, ethical solutions to our common moment of peril.

How should the MSU Museum engage with this epoch-making “turning point”?  We have been pondering new kinds of advanced technological installations, including a “Science on a Sphere” system that will allow visitors to see datasets streaming in from the National Oceanographic and Atmospheric Administration (NOAA) remote sensing platforms. Projected on a great hanging globe will be moving images of glacial retreat, new ocean current patterns, changing bird migration routes, hurricane and typhoon tracks, and all manner of geophysical phenomena. It would be thrilling to have such an installation in the heart of our museum.

We’ll also be developing exhibitions that highlight humanity’s diverse struggles in the face of the Anthropocene. We’re considering installations exploring the global crisis in pollination, which poses central challenges for the world’s food systems. We’ll explore exhibiting our collection of indigenous beekeeping technologies from the Okiek peoples of East Africa highlighting their environmental struggles to preserve biodiversity in Kenya’s Mau forest. New pollination conservation efforts right here in Michigan could be chronicled. We could document efforts by MSU scientists and students to chart the environmental health of the Great Lakes and share Native American storytelling related to changing climate patterns.

Our expectation is that these efforts will center on partnerships with significant artists. We may commission site-specific art works uniquely suited to our museum and its location on the “sacred space” of the campus, attentive to indigenous landscape histories and our magnificent campus arboretum. These new art works might incorporate, in ways we can’t yet begin to anticipate, organic and fossilized specimens from our natural science collections, as well as artifacts and cultural objects that illustrate the pre-histories and histories of the Anthropocene. Perhaps, rather like Mark Bradford’s latter day cyclorama, they will dramatize both the shocks and the terrible beauty of this “turning point” in global environmental history.  We trust that these unexpected art projects, rather like Pickett’s Charge, will erupt with passionate energies and force us all to confront our individual and shared responsibilities in a great moment of decision-making. Our planet, and our posterity, deserve no less.

Your ticket for the: Turning Points: From Pickett’s Charge to Facing the “Anthropocene”

Turning Points: From Pickett’s Charge to Facing the “Anthropocene”