Inspired by the exhibition “War and Speech” and by the approaching 100th anniversary of the end of World War One, MSU Museum Director Mark Auslander reflects on a precious object of personal family memory, evoking “lost worlds” in Europe prior to the Great War and the Holocaust.

As we begin 2018, our thoughts at the Museum turn to the approaching centenary of Armistice Day, which brought World War One to a close on November 11,1918—at “the eleventh hour of the eleventh day of the eleven month.”  We explore the legacies of this vast conflict in our continuing exhibition, “War and Speech: Propaganda, Patriotism, and Dissent in the Great War,” on display through next November 11.

The “Lost World” of the Hapsburgs

In many respects our modern world was born out of the First World War. It is also worth recalling the worlds that were lost in the wake of the struggle. The Jewish central European novelist Joseph Roth observed during the interwar period that the Great War, “…is now, in my opinion, rightly called the World War, not only because the whole world was involved in it, but because as a result of it, each of us lost a world, our own world.”  (Joseph Roth, The Emperor’s Tomb, pp. 38-39) For Roth, the key loss was the Austro-Hungarian Empire, which for all its faults, had emancipated its Jewish populations over the course of the 19th century, and provided them with a measure of legal protection against anti-Semitism as well as sense of cultural anchoring in German language and literature. (My grandfather, like many of his background, joked that he preferred to “read Shakespeare in the original German.”)  As fascism and overt anti-Semitism rose throughout the former imperial lands over the course of the 1920s and 1930s, many Jews came to recall the reign of the Hapsburgs with bittersweet nostalgia, as a “lost world” of cultured cosmopolitanism. 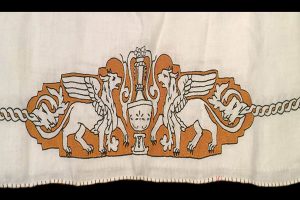 Recently, I have been contemplating an heirloom object passed down through my own family, which seems to evoke, in part, this nostalgic longing for a pre-war lost world. In 1936, my grandfather Dr. Jacob Auslander, a physician residing in New York City, traveled to his hometown of Radautz (Rădăuți) in Bukovina, a former outpost of the Austro-Hungarian Empire, then part of the Kingdom of Romania. He hoped to bring back his parents, Isaac and Clara, and his six-year-old motherless, nephew Severin Pagis, who was being raised by Isaac and Clara (Severin’s father had emigrated to Palestine). Issac and Clara refused to emigrate to America, in part over economic fears about life in Depression-era America. (Jacob, in hindsight, better anticipated the dangers of Nazism and fascism in Eastern Europe than did his parents.)

On his way back home through Vienna, a city he loved, Jacob bought four identical linens. Each featured an elaborate vase motif inspired by the Hapsburg Coat of Arms, held aloft by the mythical winged lion creatures known as Gryphons. Upon returning to New York he presented the linens to his wife Rebekah and her three sisters living in New York. One of these beautiful cloths has come down to me and my wife Ellen. We treasure it as one of our very few material connections to the family’s Old World history.

I suspect that in 1936, like many Jews of the former Austro-Hungarian Empire, Jacob valued the cloths for the evocation of the lost era of the Hapsburgs, a time of relative Jewish safety, in striking contrast to the waves of intolerance then sweeping the continent. I should note that my beloved ninety-year-old cousin Arthur, who met his uncle Jacob during his 1936 visit to Bukovina, is skeptical of this interpretation: he recalls that Jacob was a committed leftist, with little sympathy for the Hapsburgs. Yet it may be that a political critique of the Empire could coexist with enduring nostalgia for that particular lost world.

The Holocaust Comes to Bukovina

In any event, for the Jews remaining in Radautz, the last remaining traces of that former world were shattered during October 9-10, 1941, when Romanian fascist authorities ordered all Jews in the town to board cattle cars normally used to transport livestock to their deaths.

Among those in the sealed train cars were Isaac, Clara and their eleven-year-old grandson Severin.  We do not precisely know what transpired within those spaces of unimaginable horror. The circumstances are hinted at in a famous poem that Severin wrote years later, after he had emigrated to Israel and taken the name Dan Pagis:

Lines Written in Pencil in the Sealed Train Car

Here, in this cattle car,
I am Eve,
Mother of Abel
If you see my other son, Cain, son of Adam,
tell him that I

The poem is brutally interrupted even as it runs in an endless circle: Eve never completes her written message, yet at the same time she eternally repeats it. I am struck that these lines powerfully evoke the predicament of the Old Testament’s first family after their expulsion from the Garden, traveling “East of Eden.” In perpetual exile, all of us, the children of Adam and Eve, are bound to contemplate our human propensity both for endless love and for unspeakable violence. The poem is among the most powerful evocations I know of loss—of childhood innocence, of mythic homeland, of historic belonging.

Those who survived the train trip across the Dnister River in October 1941 were forcibly settled in the region known as “Transnistria” (Across the Dnister), established under joint Romanian-German fascist rule. From late 1941 to early 1944, many thousands of deported Jews were subjected to forced labor, gradual starvation, overcrowding, disease, and arbitrary beatings. Many were murdered by mobile Nazi execution squads, the dreaded Einzatzgruppen D.

I have only been able to trace a little of what befell Isaac, Clara, and young Severin during the Deportation period. Three documents in the Holocaust Memorial Museum in Washington DC record that small amounts of money were transferred to Issac in 1942 and 1943, by the Jewish Agency in Bucharest and by his son-in-law Dr. Bertl Klinghoffer (Arthur’s father), who as a skilled physician was allowed by the fascist authorities to remain in his home village of Storojinet.

Arthur recently wrote to me that his father tried to send more money to Isaac, through a secret messenger who disappeared and who was presumably killed.

We believe that Issac perished in Transnistria in 1944; his wife Clara finally made it back to Radautz where she survived until 1948 and is buried in the old Jewish Cemetery.  (Last summer, I was deeply moved to learn, two German high school teachers and their students travelled to Radautz from the Rostock region, and worked with local Romanian young people to help restore the cemetery, carefully cleaning, among others, great-grandmother Clara’s tombstone). Their grandson Severin emigrated to Palestine in 1946, and under the name of Dan Pagis went on to become one of Israel’s most important poets and literary scholars.

The Work of Objects

Here, then, is yet another reminder of why we so profoundly need museums, those repositories of physical objects, which link us in such intimate ways to the mysteries of the natural world and to our own human pasts.  We are a story-telling species, and objects, which we can touch (or almost touch, even if preserved behind glass) inspire us, again and again, to tell new stories, linking us to others, across the chasms of loss and time.

So here is a story I tell myself, as I hold in my hand the linen brought back by grandfather Jacob in 1936, from a world that was on the verge of annihilation, although few fully anticipated that terrible future at the time. I imagine him looking at these textiles in a Vienna shop, contemplating the gryphons lifting up the lost emblem of the empire. Classically trained, grandfather likely knew that the gryphon was the ancient symbol of the eternal nature of the marriage bond: a gryphon is said to travel the entire world in search of its lost mate. Jacob knew he was returning to America without his parents, but in these beautiful cloths, perhaps he sensed he carried a trace of their marriage bond, the bond that would sustain them through at least three years of the Holocaust, until Isaac was finally taken from us.

My grandfather died before I was born, and I cannot confirm the literal truth of my reconstructed story. All I know is that we need such stories, amidst all the joy and tragedy of life, to remind us again and again of the power of love, resilience and hope. This is the gift that objects bequeath to us—triggering our imaginations, binding us to worlds and persons whom we have lost, and calling new futures into being.

Your ticket for the: Worlds Lost and Worlds Regained