MSU Science Gallery’s Head of Programming Antajuan Scott is part of a group that was selected to receive a research grant through Pacific Standard Time, a Getty initiative focused on the intersection of science and art. 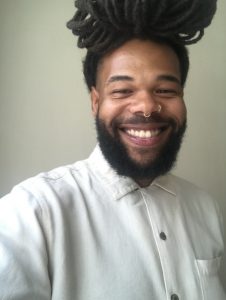 Scott will collaborate as a curatorial partner with the California based art research institute Fathomers, a self-described “creative research institute dedicated to producing sites and encounters that challenge us to live and act differently in the world.” The $115,000 research grant will help support Emergence: A Genealogy, which is a global bioart survey that combines synthetic biology with design, sculpture, social practice, performance, and artist-led activism with the goal of challenging definitions of what is natural, synthetic, conscious, and essential to human existence.

“I’m so thrilled to be collaborating with Fathomers on this project. It is my hope that this exhibition and associated programs creatively highlights the influence of art, science and research as tools in understanding our world and what is emerging within it,” says Antajuan Scott.

Opening in 2024, this will be the third regional collaboration of Getty’s Pacific Standard Time series. The upcoming event will include dozens of simultaneous exhibitions and programs focused on the intertwined histories of art and science, past and present, that together address some of the most complex challenges of the 21st century. Emergence: A Genealogy will be presented in fall 2024 at the Japanese American Cultural and Community Center in L.A. Scott noted that he hopes that the Michigan State University Science Gallery can eventually bring the exhibition and programs to the MSU Museum.

Michigan State University Museum
The MSU Museum is the science and culture museum at Michigan State University and the state’s first Smithsonian Affiliate. The museum features three floors of special collections and changing exhibits. The Museum is located on 409 West Circle Drive next to Beaumont Tower on the MSU campus. Visitor parking is available at metered spaces at the Grand River Ramp, one block away at the corner of Grand River Avenue and Charles Street. For more information, call (517) 355-2370 or see museum.msu.edu.

About Fathomers
Fathomers is a creative research institute dedicated to producing sites and encounters that challenge us to live and act differently in the world. We cultivate the ideas of die-hard dreamers, commission projects that seem far-fetched, and enlist expansive thinkers across disciplines to redefine the limits of scale, scope and support for artist-led projects.

We do this because we value discoveries made absent predetermined outcomes, and we believe in the power of the realized dream as a test site and model for visionary change.

Pacific Standard Time is an initiative of the Getty.

Your ticket for the: MSU Science Gallery Part of Getty Foundation Grant