After two years of social distancing and other precautions due to the ongoing pandemic, the MSU Museum is pleased to bring the local community together in an outdoor public setting for an exciting new films series that will entertain, enlighten, and illuminate minds. Field of View: An Art x Science Film Series, co-presented by the MSU Museum, MSU Science Gallery, and the City of East Lansing, features a collection of eight thought-provoking documentaries exploring humankind’s understanding of the world. This outdoor film series takes place weekly on Thursdays from June 2 to July 21, 2022, at Valley Court Park (300 Valley Ct.) in East Lansing. 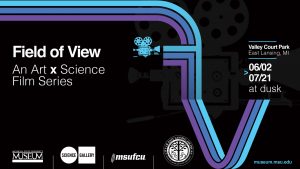 “We are pleased to once again be partnering with the City of East Lansing on public programming that will entertain and delight our local communities,” said Devon Akmon, Director of the MSU Museum and Science Gallery. “The film series reinforces our mission of engaging audiences with timely and relevant educational content at the nexus of the arts and sciences.”

From the Sundance Film Festival to the South by Southwest (SXSW) Film Festival, the eight captivating films in this series have been entertaining audiences across North America. All the films in the series come from the catalogue of Sandbox Films, a production studio that illuminates the art and beauty of scientific inquiry.

The series kicks off with Fireball: Visitors from Darker Worlds by renowned German director Wener Herzog and Clive Oppenheimer. Fireball investigates the cultural, spiritual, and scientific impact of meteorites, and the craters they create around the globe. The film premiered at the 2020 Toronto International Film Festival and received a nomination for the 2020 Critics’ Choice Documentary Awards for Best Narration.

Next up is Oliver Sacks: His Own Life, which initially premiered in 2019 at the Telluride Film Festival. In this film, director Ric Burns sits down with legendary British neurologist, naturalist, historian of science, and writer Oliver Sacks for a series of filmed interviews in his apartment in New York City months before his death. Sacks’ story ultimately helped redefine our understanding of the human brain and the diversity of the human experience.

All films start at dusk (approximately at 9:20 p.m.). An overview of all eight films, along with free registration to attend the screenings, can be found here.

Black Holes: The Edge of All We Know
Director, Peter Galison
July 7

Your ticket for the: Field of View: An Art x Science Film Series